The fall armyworm (Spodotera frugiperda) is the caterpillar species most commonly associated with foliar damage seen on turfgrasses, such as bermudagrass (Cynodon dactylon) and tall fescue (Festuca arundinacea) and home landscapes in South Carolina. Often noticed in late summer, these highly destructive caterpillars crawl through once pleasantly green areas, and in just a few hours, turn them into brown wastelands.

Adult moths, which may be attracted by bright lighting, will lay up to 1,000 eggs in a single night. They lay eggs in areas near desirable food sources, often on grass blades or upright structures, such as fenceposts and house siding. Upon hatching, the larvae spin silken threads, which aid in dispersing them from structures, and they immediately begin feeding. Minimal damage may be observed during early development. However, after the 4th larval state, over 93% of foliage consumption occurs. By the 6th stage of development, the larvae will burrow into the thatch and soil layer, where they will pupate and emerge as adults 10 to 20 days later. 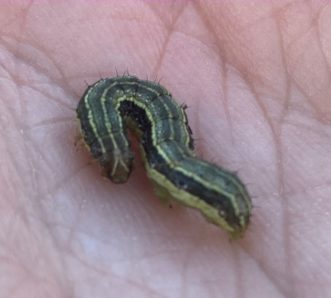 Armyworms (Spodoptera spp.) can be easily identified in larval stages by the inverted “Y” shape on their heads.
Adam Gore ©2021, Clemson Extension 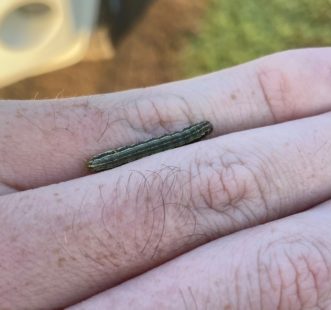 Armyworms (Spodoptera spp.) can reach up to 1½ inches in length during the larval stages.
Adam Gore ©2021, Clemson Extension

In South Carolina, the peak of the armyworm developmental season typically takes place during the summer months. The entire life cycle of a fall armyworm can be completed in a single month with the potential for three or more generations to occur in a single year. The presence of armyworms in South Carolina generally depends on population explosions from southern states located around the Gulf of Mexico, where the climate is favorable for these insects to overwinter.

Fall armyworm moths are primarily gray in color with white markings and normally have a drop-shaped mark in the middle of the forewing. Adults may be up to 1 inch in length with a wingspan reaching 1½ inches. Larval stages range in color from green and yellow to brown and grey and can reach 1½ inches in length. The distinguishing characteristic of larvae is the presence of a yellow to white upside-down ‘Y’ shape on the head. Egg masses are white to cream in color and normally have a furry or moldy appearance, with eggs darkening in color over time.

In landscapes, initial damage from early instars (developmental stages of larva) may resemble drought or wilting symptoms in turfgrass, with later instar damage leaving a scorched or scalped appearance as most green foliage is consumed, leaving only grass stems.

During the early morning or late evening hours, several armyworms can be seen feeding or moving in large numbers hence the “army” reference in their common name. If you suspect the presence of armyworms in your lawn, mix 1-2 tablespoons of lemon-scented dish detergent in 1 -2 gallons of water and then mix until suds appear. Then, slowly pour mixture over a 1 square yard section of healthy turfgrass directly next to damaged areas. Armyworms will emerge within 10 minutes of pouring. Armyworms (Spodoptera spp.) feed on turfgrass foliage, causing it to have the appearance of suffering from drought or scalping damage.
Bert McCarty ©2021, Clemson University

When damage is observed, the use of insecticides containing active ingredients, such as bifenthrin, Bacillus thuringiensis (B.t), cyfluthrin, cypermethrin, lambda-cyhalothin, permethrin, or spinosad, are viable options for control. When using contact insecticides, remember to avoid any irrigation or rainfall within 24 hours of application to allow for the maximum amount of time for impact on the armyworms. See Table 1 for examples of products containing these products.

When damage is observed, it is recommended to use contact insecticides to prevent further damage. The use of insecticides containing active ingredients, such as bifenthrin, cyfluthrin, cypermethrin, lambda-cyhalothrin, permethrin, or spinosad, are viable options for control. When using contact insecticides, remember to avoid any irrigation or rainfall within 24 hours of application to allow for the maximum amount of time for impact on the armyworms. See Table 1 for examples of products containing these products.

In areas of high value turfgrass, the use of Acelepryn G has demonstrated season long control of armyworms when applied in April or May.

Remember to read and follow all handling and applications directions as found on the label of each pesticide.

Pesticides are updated annually. Last updates were done on 09/22 by Adam Gore.