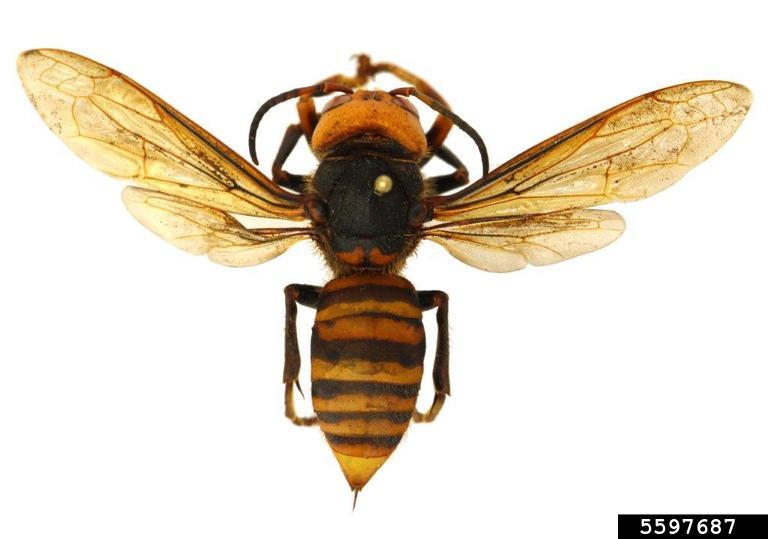 Asian giant hornets (Vespa mandarinia) are about 2 inches long and are not established in South Carolina. In the United States, the only specimens found have been in northwest Washington State near the Canadian border.
Photo credit: Washington State Department of Agriculture, Bugwood.org. Cicada killer wasps are native and common in South Carolina. They are solitary, but several will sometimes nest in the same areas. Males can also be found around the holes the females make in the soil in sheltered areas. The males do not sting. The females can sting, but rarely do and are generally considered beneficial due to the many pest insects they feed on.
Photo credit: Gerald J. Lenhard, Louisiana State University, Bugwood.org

For years, Clemson Extension personnel in South Carolina have received claims from many homeowners that they have Japanese or Asian giant hornets on their property or nesting in their homes. They have not. They have either had native cicada killers, baldfaced hornets, or the exotic European hornet. All these wasps are large, but they are not as large or intimidating as the Asian giant hornet, Vespa mandarinia. South Carolinians often use the subspecies name Japanese hornet, Vespa mandarinia japonica, but experts have merged the two as just the Asian giant hornet. Unfortunately, now some in the news media are reporting them as “murder hornets.” 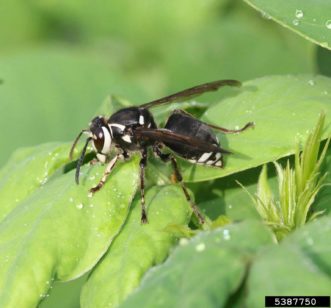 Baldfaced hornets (Dolichovespula maculata) are native, social insects that live in nests. Their nests can be in many locations, but they are usually a gray, large football-shaped paper nest. They make the paper by chewing bark from trees. Sometimes their nests are found on buildings. They feed on many insect pests and are often considered beneficial in the natural environment.
Photo credit: Johnny N. Dell, Bugwood.org.

Asian giant hornets are big. They are five times larger than a honey bee, and they may feed on many other insects, especially other social bees and wasps such as honey bees. They have a super thick exoskeleton making them impervious to honey bee stings. Their size and thick “skin” has led to many urban legends about their ability to attack and even kill (murder) people and other animals. Despite these myths, Asian giant hornets pose no more of a threat to people than any of the native bees or wasps. Asian giant hornets do pose a threat to managed honey bee colonies. While honey bees can’t sting Asian hornets to death, they can kill individual hornets by “balling” around them, vibrating their flight muscles, and killing the hornet by heat exhaustion. However, when multiple hornets attack at once, they are able to overcome the bees’ natural defense, killing the workers. In this manner, they are able to destroy a honey bee colony in a matter of hours. Back in the 1980’s, Africanized honey bees moved into Texas from Central America. This strain of honey bee was more defensive in protecting their nests than our more docile honey bees, which originated from Europe. Some in the news media called these bees “killer bees.” Thirty years ago, there was concern that Africanized honey bees would sweep across the southern states, killing many people and animals and wiping out beekeeping as we know it. That didn’t happen. 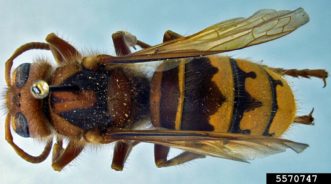 European hornets (Vespa crabro) are social insects that live in nests. They are not native to South Carolina, but they have been in the state for over 160 years. Their nests can be in many locations, such as abandoned bee hives, hollow trees, wall voids, and attics. They feed on many insect pests and are generally less aggressive than other hornets. Photo credit: Allan Smith-Pardo, Invasive Hornets, USDA APHIS PPQ, Bugwood.org The southern yellowjacket (Vespula squamosa) is one of many native yellowjacket species in South Carolina. Many yellow jacket species nest in the ground, but there are some species that nest above the ground. Generally, most yellowjackets die in the winter. However, sometimes queens and workers can live through the winter, creating a very large nest with thousands of individuals. These can be dangerous. If encountered, consider hiring a pest management professional experienced in controlling stinging pests.
Photo credit: Jerry A. Payne, USDA Agricultural Research Service, Bugwood.org

What does this mean for you in South Carolina? No more concern than you may have about Africanized honey bees. You shouldn’t worry about seeing Asian giant hornets in South Carolina anytime soon.

If you are to be concerned about stinging wasps, it should be about our native yellow jacket species. Yellow jackets are much smaller than hornets and in natural settings can be beneficial, feeding on insect pests in our gardens. However, a mature colony can have thousands of individuals, far more than a hornet’s nest. If yellow jackets establish their nest in or close to an area where people frequent, they can become defensive if they feel the nest is threatened. The sheer number of yellow jackets that may attack a person or animal makes them far more dangerous than a hornet. 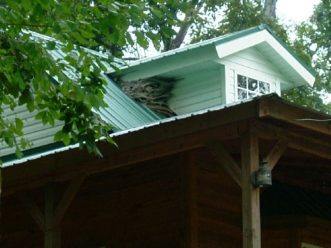 Usually, yellow jacket colonies die back in freezing weather in the winter, leaving only a few queens to over-winter. Therefore, yellow jackets are usually not a spring pest. Colonies don’t grow to a large number until the late summer or early fall. However, over the last 10 years, some colonies of southern yellow jackets, Vespula squamosa, have been found to have perennial nests. This is where the colony does not die back over the winter and continues to grow in size and can have many queens. One Extension specialist at Clemson dealt with a perennial southern yellow jacket nest in an old barn in South Carolina several years ago and estimated there to be over 100 queens and 250,000 workers! A nest this large is extremely dangerous!

This past year we experienced a relatively mild winter. There were very few freezing days across the state. So, as we start to move outside more with the warmer weather and the easing of some of the shelter-in-place recommendations due to COVID-19, be careful. We don’t expect you will see any Asian giant hornets, but you may see a giant yellow jacket nest, which would be a far bigger concern.

If you do encounter yellow jacket nests that are large and in a location that threatens your safety, considering hiring a professional pest management company for their elimination, professionals have the expertise, equipment, and products to eliminate a dangerous nest of yellow jackets.