Thars gold in them thar hills (and in the flatlands too)! Goldenrod is an important nectar source for insects such as these two spider wasps. The wasps in turn help with pollination.
Eric Benson, ©2020, Clemson Extension

The rustling of dried corn stalks, stacks of pumpkins at the roadside stand, Halloween costumes at your local general store… all are signs that Fall is lurking, but none of these announces Autumn as loudly as goldenrod, the plant that, like a restless toddler, seems to think that its playtime when most other plants are winding-down before their winter slumber. For beekeepers, the splashes of yellow goldenrods along roadsides and field edges are welcome signs that the fall nectar flow is underway and that bees no longer must suffer the summer dearth. For the bees, this is crunch time, the last major push to prepare for winter and overcome the thievery of humans

Although goldenrods are generally acclaimed as both nectar producers and medicinal plants, they are often poorly understood, even among the scientific community. Goldenrods are members of the genus Solidago, which includes more than 100 species native to North America. The exact number of species is unknown because botanists have difficulty developing a consensus. Some species exhibit extreme polyploidy, meaning that they have many more than just two copies of each chromosome, which results in highly variable traits. Modern molecular tools are showing that our understanding of goldenrods is weak at best. That being said, the primary point is that goldenrod is not just one plant but rather a collection of many species of plants with highly variable traits. Some, like Tall Goldenrod (Solidago altissima, the SC state wildflower), grow up to 6 feet tall, while others, like Bluestem Goldenrod (S. caesia) grow to only 2 feet. Some species like wet sites, while others prefer dry, well-drained soils. A few species prefer shady understory habitats, but most prefer mostly direct sunlight. While we usually associate goldenrod flowers with fall, a few species bloom in the spring. 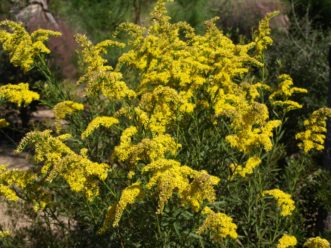 All goldenrods, as with other members of the Asteraceae, are referred to as “composites,” meaning they have flowers clustered together into a composite flower that contains both ray and disc flowers. The most recognizable composite is the sunflower, which has a ring or broad, petal-like flowers (rays) around a disk of dozens or hundreds of small, tightly packed flowers (discs). Upon close inspection, you will find that each goldenrod “flower” has these same rays and discs, but they also bear dozens or even hundreds of these composite flowers, which gives them their dazzling show of color. In general, composite flowers are highly attractive to a wide array of pollinators, including honey bees, and goldenrods provide a substantial nectar source for fall foragers. An array of different beetles, flies, butterflies, wasps, and bees vigorously forage on goldenrods when they are blooming, and fields containing goldenrods will be bustling with insect activity. Another feature common to all goldenrods is that they are perennial, meaning that they survive the winter as rootstock. Because they are also hardy and tolerant of disturbance, they can be transplanted and subdivided.

Goldenrods sometimes get a bad reputation among the general public. They are often accused of causing hay fever and allergies, but that accusation is undeserved. They have large sticky pollen grains, which are carried by insects, but because their showy blooms coincide with the inconspicuous ragweeds, they sometimes get blamed for peoples’ discomfort. Also, goldenrods are frequently referred to as “weeds” because they are quick to colonize disturbed areas such as agricultural fields or powerline rights-of-way. Generally, though, they take two to three growing seasons to get established at new sites, so “weed” might be a little too harsh a term.

Goldenrods have received some attention recently among horticulturists and gardeners, and several ornamental varieties are now available as seed or seedlings. These include ‘fireworks,’ ‘golden sun,’ ‘golden fleece,’ ‘baby sun,’ and a few others. These ornamental varieties do not spread as quickly as wild types and are less likely to become weedy in small gardens.

I have yet to meet a beekeeper or entomologist that is not intrigued by a walk through a blooming field of goldenrods.

For more information, see How to Tell the Difference Between Goldenrod and Ragweed, and HGIC 1721, Pollinator Gardening.