“If a swarm of honey bees is seen, call a beekeeper, not an exterminator!” Few things will grab attention as quickly as the buzzing of thousands of bees clustered on a tree branch and flying all around the yard. It also can be very alarming because, after all, these are stinging insects that will defend themselves if disturbed. Although having a swarm of bees in the yard might be unnerving, it is fascinating and one of Nature’s most dazzling displays of coordinated behavior. 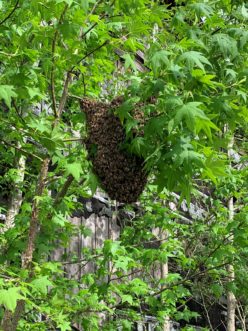 What Is A Swarm Of Honey Bees?

Swarming is the process by which honey bee colonies reproduce to form new colonies. When a honey bee colony outgrows its home, becomes too congested, or too populated for the queen’s pheromones to control the entire workforce, then the workers signal that it is time to swarm. The workers begin building swarm cells for new queens. Once the swarm cells are constructed, and the queen lays eggs in them, then the colony changes its behavior. Foraging slows down, and the workers begin erratic movements within the hive. Meanwhile, the queen quits laying eggs and reduces her weight to be able to fly. When the queen is ready, she leaves the hive and is followed by about half of the workers in a massive cloud of flying bees. The queen will find a nearby tree, land, and emit pheromones that signal the workers to cluster around her. The cluster will remain there for several hours while scout bees explore the area for a new home. Often the cluster will leave, travel a mile or more, and reform on another branch far away from the original hive. The cluster will remain until scout bees locate a new hive or cavity to occupy. Once a suitable home is found, the entire cluster will take flight and move to the new location where it will begin building comb, developing new brood, and gathering pollen and nectar.

The queens developing in the swarm cells in the old hive are attended by half of the workers that did not leave with the swarm. After 16 days, the new queens begin to emerge. Typically, the first queen to emerge will sting the other queens in their cells and kill them in order to assume the role as the new queen for the colony. She then will take flight to find drones to mate with in order to begin the process of egg-laying and rebuilding the workforce in the colony.

When Do Swarms Occur?

Usually, swarming activity coincides with the nectar flow in the spring. This is when a wide variety of plants are in bloom, making nectar and pollen resources bountiful. The primary swarm season is between March and May, but occasionally secondary swarms occur later in the season. These secondary swarms often are not as successful in establishing new colonies because they are unable to build new combs and collect sufficient resources in time to survive the coming winter. 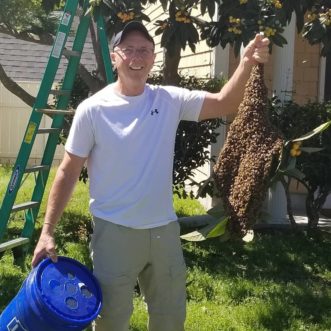 When honey bees are swarming, they are not nearly as defensive as they are around their hive because they are not protecting brood (developing young bees) or honey stores. They are more concerned with scouting for a new home and staying in protective clusters around the queen. If disturbed or agitated, they will defend the cluster; therefore, it is advisable for people to keep their distance from a swarm of bees to avoid being stung.

The Swarm Has Been There All Day. How Long Will It Take For Them To Leave?

This is difficult to answer because it depends on weather conditions and when the scout bees find a suitable cavity to colonize. Typically, swarms only stay in one place for a few hours or maybe a day, but some swarms may remain for several days.

The Swarm Is In A Place That Is Problematic (Near A Public Walkway, A Doorway, A Playground Or Schoolyard, A Public Park, Etc.). How Can It Be Safely Removed?

Although the swarm may be alarming, especially to people who are allergic to bee stings, please do not spray the swarm with an insecticide or attempt to destroy it. This actually may agitate the bees and increase the likelihood of being stung. More importantly, honey bees face many perils and have suffered significant declines in recent years. An array of pests, diseases, and environmental stresses have caused significant losses for beekeepers; therefore, bee swarms should be protected rather than destroyed. South Carolina beekeepers are found statewide, and many are eager to collect swarms to start new colonies, enhancing the chances that the swarm will survive. The easiest way to find a swarm collector is to contact a local beekeeping association. A list of local beekeeper associations and their contact information is available at https://scstatebeekeepers.com/about/local-associations/. 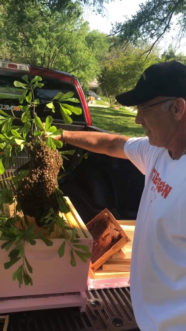 Is It Illegal To Destroy A Honey Bee Swarm?

It is not illegal to destroy a swarm of honey bees, but it is not advisable. Trying to destroy a swarm can be dangerous, especially without the correct protective gear. More importantly, honey bees are beneficial pollinators that support agriculture and native plant communities. They also can provide beekeepers with income; therefore, contacting the closest local beekeeper’s association to notify them about the swarm should be the first step in removing the swarm.

The Bees Have Moved Into A Building. Now, What Can Be Done?

If bees have moved into a chimney, column, or wall space in a building, then they are no longer swarming and will remain to build a new colony. They will build wax combs, lay eggs, and store honey and pollen. Sealing the entrance or killing the colony will leave the bees and their hive materials inside the cavity to die and rot, which will attract rodents and pests. The colony and its provisions must be removed before the entrance is sealed. This may require some deconstruction, which may be beyond the abilities of the beekeeper. A few beekeepers around the state are capable of this type of work. Some beekeepers can deconstruct and remove the colony, but repairs will require the skills of a licensed contractor that can clean and restore the damaged structure. 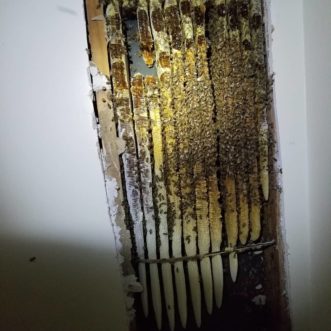 Bees and honeycomb that were found in the wall of a home.
James Craig, Charleston Area Beekeepers Association

Beekeeping is growing in South Carolina, and many new beekeepers live in and around the state’s developing areas. This means that South Carolina residents are more likely to witness a swarm than ever before. This should be encouraging rather than alarming because it is a sign that South Carolina’s beekeeping trade is vibrant and that beekeepers are overcoming the many challenges they face. The Clemson Apiculture and Pollinator Program appreciates the public’s support of beekeepers through the protection of swarms wherever they are encountered. For more information about honey bees and pollinator protection, please visit the Clemson Apiculture and Pollinator website at https://www.clemson.edu/extension/pollinators/index.html.