Gnats are among the most aggravating insects that plague certain regions of South Carolina each spring and summer. The first killing frost in the fall is always a welcome relief for those that enjoy spending time outdoors. There are two different small flies that are referred to as gnats, and though these may seem similar, they differ greatly in habit as well as the way they interact with humans.

Biting gnats, also called sand gnats or no-see-ums, are in fact biting midges. These midges (Family: Ceratopogonidae) are most prevalent near sources of water such as swamps, marshes, ponds, and the edges of streams. The mud around these moist areas is where the females lay eggs and the larvae develop. 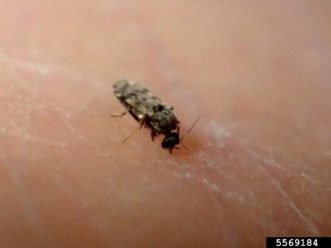 Males and females feed on nectar from flowers, but females also require a blood meal to produce eggs. Humans are frequently the blood supplier for midges in the genus Culicoides. Females primarily feed early and late in the day and leave an itchy, raised spot on their victim’s skin very similar in appearance to a mosquito bite. Due to their tiny size (around 1/16 inch), most humans never see the midge as it feeds, hence the nickname no-see-um.

In developing regions of the world, biting midges have been associated with parasite infections of the skin in humans. Additionally, bluetongue, a virus that is more common in Europe, but has been found in the US, is an economically significant disease of sheep and cattle transmitted by various species of Culicoides midges.

These non-biting flies in the genus Liohippelates (Family: Chloropidae) are also called grass flies, eye flies, or frit flies. They are most prevalent in areas where the soil is loose and sandy, especially when the soil has been disturbed by digging, plowing, or grading. Eggs are laid, and larvae develop in the soil in these areas. The presence of animal manure can increase breeding activity as well.

Adults frequently swarm around the heads of humans and animals where they feed on mucous excreted from the eyes, nose, ears, or wounds. Eye gnats are small (around 1/8 inch) and numerous. Their extremely persistent feeding behavior is what makes them a tremendous nuisance. Though eye gnats do not bite, they have been associated with the spread of certain diseases. Acute conjunctivitis (pink eye) can be acquired when a gnat lands in a human or animal’s eye and mechanically transmits the causal bacteria. Other conditions transmitted by gnats, such as sepsis in humans, mastitis in cattle, and vesicular stomatitis in horses, sheep, goats, and pigs, have also been recorded.

Area-wide control of biting midges and eye gnats is nearly impossible due to the abundant populations of each that exist in certain areas. Various broad-spectrum insecticides have been tested that will kill adults; however, the populations are rapidly replenished from breeding sites. Insecticide applications will likely be required on a daily basis to keep gnat populations suppressed.

Screening of porches or other outdoor areas with a very fine mesh screening (20×20 mesh or smaller) can be used to exclude biting midges. An 18×16 mesh screen is usually sufficient for eye gnats. A ceiling fan installed under a covered porch or a box fan can help keep gnats away, as they are small enough to be blown off course by air movement. Insect repellents containing DEET may be used to repel gnats temporarily.