How to Tell the Difference Between Moles & Voles 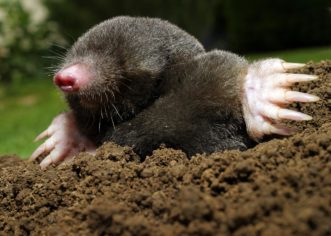 A mole is 4 to 7 inches long with paddle-shaped feet and prominent digging claws.
Courtesy of Mississippi State University Extension Service

It is important to know the difference between mole and vole damage to the landscape. One way to distinguish the difference is by the diet of each animal. Moles “M” are meat-eaters, and their diet consists of insects, grubs, and earthworms. Voles “V”, on the other hand, are vegetarians and eat the roots and stems of plants.

Description of a Mole

A mole is 4 to 7 inches long with paddle-shaped feet and prominent digging claws. It has an elongated head and snout, small eyes, and no external ears. The short black-to-brownish-gray fur has no grain, which allows the mole to move easily forward and backward in the tunnels. 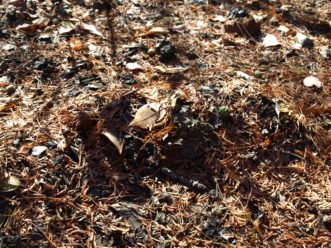 It digs characteristic volcano-shaped hills in the lawn. The tunnels are dug at a rate of 18 feet per hour and can add 150 feet of new tunnels in the lawn each day. Moles are expert diggers that will consume up to 60 to 100% of their body weight in insects, grubs, and earthworms each day. This equates to a 5-ounce mole eating 50 pounds of its prey in a year.

Nothing is more frustrating to a homeowner with a beautiful lawn than to see molehills all over the yard. Moles are most active in the early morning and late evening on cloudy days during the spring and fall. There are many methods advertised for removing moles, such as chewing gum and vibration and ultrasonic devices, that are advertised to deter them. Often, however, these methods are not very effective. Mothballs also do not work, and it is illegal to use as it is considered a misuse of a pesticide.

Poisons are usually the first method that a homeowner thinks of but is not necessarily the most effective or best choice. Poisoned gummy worms or pellets with an active ingredient of bromethalin may be inserted in an active tunnel, but they may pose a hazard to humans and pets and may possibly enter the wildlife food chain. If poison baits are left in place, they have the potential of being washed into water sources. When using any type of poison or chemical, carefully read and follow the label instructions. 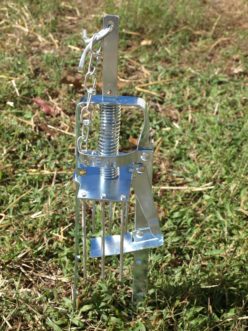 Trapping is one of the most successful ways to get rid of moles. Several different types of mole traps, such as harpoon, impaling, choker, pitfall, or scissor-jawed, are available on the market. Traps should be placed over an active tunnel and are the most effective in the fall and winter months. Snap traps, such as a mousetrap baited with peanut butter, are ineffective in catching moles. Moles are solitary animals, so ridding the landscape of one or two moles will make a big difference.

Reducing or eliminating food availability for moles has been used as a control technique. Using a grub treatment for a lawn is a common practice but is not environmentally sound as it affects the food supply for other wildlife. Moles will simply switch to another food source, such as insects and earthworms. Systemic grub treatments that contain imidacloprid as an active ingredient can be applied to the lawn area in May. These are available in ready-to-spray, hose-end sprayers, or granular formulations. Granular products are easier to apply but be sure to irrigate with at least ½ inch of water immediately after application. Because these products are systemic within the turfgrass, they will last the entire growing season. Granular grub killers that contain trichlorfon or carbaryl are contact insecticides that should be applied in early July and are spread over the lawn and watered in well. At this time, the grubs are small and close to the surface, so the contact insecticide will effectively eradicated the young grubs. This will last for about two weeks. Application in the late summer or fall is not as effective, as the older grubs will go deeper in the soil and are harder to kill. Neither of these methods is completely successful, as the moles will switch to other prey. For more information on grub control, please see HGIC 2156, White Grub Management in Turfgrass. 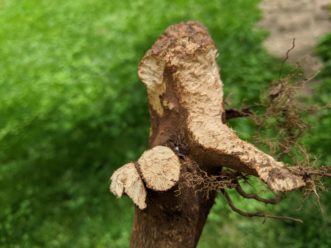 Voles are voracious pests that eat the roots of trees and other desirable plants. The vole’s front teeth will leave 1/4 inch side-by-side grooves in the wood, as seen in this photograph.
Barbara H. Smith, ©2021 HGIC, Clemson University

Description of a Vole

Voles look like field mice with short tails, compact heavy bodies, small eyes, and partially hidden ears. Voles are 5 to 8 inches long and have prominent orange teeth for gnawing plant roots and stems. These opportunists will dig characteristic golf ball-sized exit holes in previously established mole tunnels. One day a plant will be beautiful, and a few days later, it will have fallen over with the roots gnawed off. There may be multiple residents in a vole colony, so habitat modification is important in controlling them.

Habitat modification is the most effective way to control voles since they require cover and do not like to feed in the open. The two types of voles found in South Carolina are meadow and pine voles. Meadow voles are much larger and live most of their lives above ground, whereas pine voles are much smaller and live almost all their lives underground. Damage by meadow voles is usually to the base of plants and fruit trees. Pine voles will destroy the root systems of plants and trees. 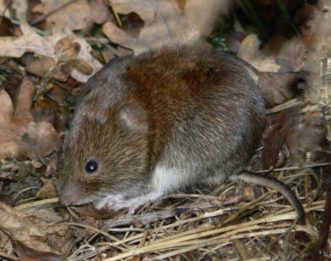 Removing weeds, heavy mulch, or dense vegetation will aid in eliminating their food source along with protection from predators. Keep turfgrass mowed and dethatched regularly, and keep mulch cleared from around tree bases. To protect an area from a vole infestation, a wire fence with a mesh of ¼ inch or smaller will help exclude them. It will need to be 12 inches above ground with 6 to 10 inches buried into the ground to prevent the vole from burrowing under the fence.

Snap traps baited with apples or peanut butter and oatmeal are an excellent way to catch voles. Set the traps along runways or near the exit holes, ensuring that the trap is placed with the trigger end toward the runway. Place a box or bucket over the trap as voles prefer to take the bait from under cover. This will also protect children, pets, or other animals from encountering the trap. Fall and late winter are the best times to trap voles. 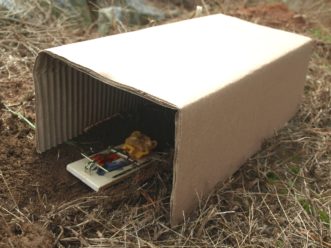 There are a number of available poison baits, but these pose a hazard to humans, pets, and other wildlife and may enter the water supply. Again, read and follow the label instructions carefully.

As both pests carry infectious diseases and parasites, it is important to wear disposable gloves when handling the dead animals. Either bury them or place them in plastic bags in the trash. If a live trap is used, remember that the South Carolina Department of Natural Resources does not allow the relocation of trapped animals to another location due to animal and human disease exposure; therefore, the captured animals will have to be euthanized.

A castor oil treatment to the lawn will also repel moles and voles for about two weeks. If it rains during that time, the product will have to be reapplied. Using a castor oil product is not the most effective way to control moles and voles as it does not have a long residual life in the soil. Do not use if irrigation is frequently run in the area as watering will quickly dilute the castor oil.