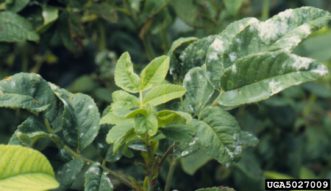 Powdery mildew is the name given to a group of diseases caused by several closely related fungi. Their common symptom is a grayish-white, powdery mat visible on the surface of leaves, stems, and flower petals. There are many hosts, and although this disease is not considered fatal, plant damage can occur when the infection is severe. In spring, as daytime temperatures rise above 60 °F, the fungi responsible for powdery mildew begin to produce spores (conidia), which are dispersed into the air. Infections occur when they contact a suitable host and environmental conditions are favorable. Initial symptoms are small, circular, powdery, white spots, which expand and eventually join as infections progress. Infections spread as spores produced in these white patches move by wind and splashing rain to other locations on the plant or nearby plants.

The fungus survives the winter attached to plant parts and plant debris, such as on fallen leaves. As weather warms in the spring, the process begins again. Powdery mildew is caused by several different species of fungi, and they each have a limited host range. In other words, observing powdery mildew on oak leaves should not be cause for concern for nearby zinnias. Plants that commonly become infected with various powdery mildew include azalea, crabapple, dogwood, phlox, euonymus, lilac, snapdragon, dahlia, zinnia, crape myrtle, rose, pyracantha, rhododendron, spirea, wisteria, delphinium, oak, English ivy, photinia, blueberry, pecan, cucumber, and squash. 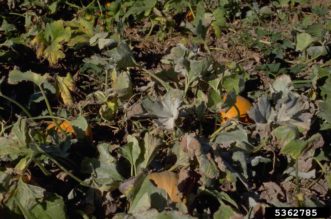 As powdery mildew fungi grow over the plant surface, they develop structures that are inserted into plant cells enabling them to extract nutrients necessary for growth and spore production, resulting in a general decline in the host’s growth and vigor, as well as the common visible symptoms.

Abnormal growth, such as leaf curling, twisting, and discoloration, may be noticed before the white signs of the fungus are visible. On dogwood, for example, leaves may take on a yellowish or reddish cast in summer or may develop reddish blotches or dead, scorched patches. The white powdery growth is not always apparent.

When visible, the powdery fungal growth is found on the upper surface of the leaves and tends to begin on lower leaves. As the disease progresses, leaves become dwarfed, curled, and generally distorted. In severe cases, leaves will turn yellow or even dried and brown. 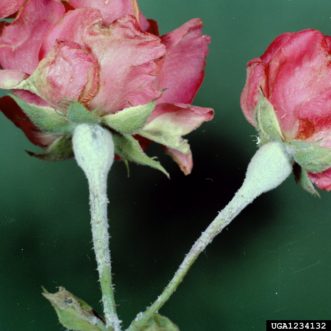 Powdery mildew fungi will also infect flowers, causing them to develop abnormally or fail to open. On azaleas and rhododendrons, small areas of dead tissue are often seen.

Powdery mildew creates other effects that are not readily visible. For example, a severely infected plant may have a reduced level of winter hardiness. Trees have also been observed to leaf out later in the spring after being infected the previous season.

As with all diseases, optimum plant health is the first line of defense. This begins with the selection of healthy plants that are planted properly and in the proper location, giving attention to requirements for light, soil, and moisture. Space them so they are allowed to grow without being crowded and water thoroughly during establishment and later during dry periods. Avoid overhead irrigation, which raises the level of relative humidity within the plant canopy.

If powdery mildew is noticed on a few leaves, simply removing them will help with control. At the end of the growing season, prune out infected stems and remove fallen leaves, which can serve as a source of further infection. Suckers are common on crape myrtle, dogwood, and other plants. These should be pruned off as they develop because they are especially susceptible, and the disease will spread from them upwards to other plant parts.

Fertilize to optimize plant health, but avoid over-fertilization with nitrogen as it stimulates young, succulent growth, which is more susceptible to infection.

Plants with a severe infection should be monitored the following spring so that if infections reoccur, they can be treated early.

When possible, select plants that show resistance to the disease (see Table 1).

Ornamental Plants: For fungicides to be effective, they must be applied as soon as symptoms are noticed. Product labels will provide information on how often to spray. When ranges are given, use the shorter interval during cool, damp weather. Be sure to cover both the upper and lower surfaces of the leaves.

Table 2 lists fungicides labeled for ornamental plants. Myclobutanil, propiconazole, and thiophanate-methyl have systemic properties and can be sprayed less often than chlorothalonil, sulfur, or copper-based fungicides. When powdery mildew persists and sprays are repeated, it is recommended to rotate (alternate) fungicides to decrease the chance of fungi developing resistance.

When deciduous plants are infected, consider the season. Generally, foliar diseases occurring in late summer do little damage. The leaves have already produced food for the plant and are going to fall off soon anyway. Just be sure to rake and dispose of them as they fall.

As with any pesticide, read the label and heed all precautions. Sulfur, for example, can damage plants if applied when temperature and humidity are high.

Caution: Pollinating insects, such as honey bees and bumblebees, can be adversely affected by the use of pesticides. Avoid the use of spray pesticides (both insecticides and fungicides), as well as soil-applied, systemic insecticides unless absolutely necessary. If spraying is required, always spray late in the evening to reduce the direct impact on pollinating insects. Always try less toxic alternative sprays first for the control of insect pests and diseases. For example, sprays with insecticidal soap, horticultural oil, neem oil extract, spinosad, Bacillus thuringiensis (B.t.), or botanical oils can help control many small insect pests and mites that affect garden and landscape plants. Neem oil extract or botanical oil sprays may also reduce plant damage by repelling many insect pests. Practice cultural techniques to prevent or reduce the incidence of plant diseases, including pre-plant soil improvement, proper plant spacing, crop rotation, applying mulch, applying lime and fertilizer based on soil test results, and avoiding overhead irrigation and frequent watering of established plants. Additionally, there are less toxic spray fungicides that contain sulfur or copper soap, and biological control sprays for plant diseases that contain Bacillus subtilis. However, it is very important to always read and follow the label directions on each product. For more information, contact the Clemson Extension Home & Garden Information Center.