Coral bells are a wonderful addition to a partly shady landscape planting. They come in an array of foliar hues that will complement most any landscape color scheme. Coral bells (genus Heuchera) are sometimes known as alumroots, and there are many species that are native to North America. Two of the earlier cultivars introduced were ‘Dale’s Strain’, which has a beautiful silver-blue marbled foliage with contrasting pale purplish venation, and ‘Palace Purple’ with bronze to reddish purple foliage. 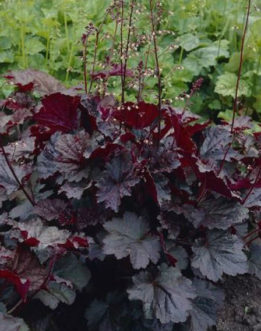 In recent years, breeders have released numerous cultivars with magnificent colors of chartreuse, peach, deep purples, silver, caramels, reds, and many with contrasting venation colors. Flower clusters are held on spikes above the foliage, and flower colors on these newer cultivars may be pink, white, or red. Amend landscape soil with compost or organic matter to improve drainage, as coral bells do not tolerate heavy, poorly drained soils. In the South, these perennials grow best in partial shade, preferring morning sunlight and afternoon shade. Provide weekly irrigation if the weather is hot and dry, and mulch plants with pine straw, leaves, or shredded bark to conserve soil moisture. In addition, coral bells will grow very well in large containers. They combine well with many native wildflowers and ferns, and with such a selection of foliar colors, it is easy to find choices whose colors blend with most any other perennial flowers.