Rob Last reports, “Insect and disease activity is increasing in the area, across a broad range of crops. In cucurbits, we are seeing powdery mildew and gummy stem blight in watermelon. Remember to keep spray intervals tight. Loopers are also being found in the area, and applications to manage rind worms will be beneficial as we rapidly approach harvest. Fusarium wilt of watermelons is showing up in many fields. At this stage, there is no effective treatment; however, soil temperatures are likely to reduce the incidence of new infections. Tomatoes and peppers are developing well with Southern blight and bacterial wilt in evidence. Spider mites are very active right now. Blackberries are just coming to harvest with good flavor and quality. Remember to scout your crops regularly to ensure timely applications can be made.”

Zack Snipes reports, “Tomatoes are starting to come in as well as every other summer vegetable. Volumes of these crops are high. I expect to see an uptick in disease this week as we had several cloudy, humid, rainy days without much actual rain. Downy mildew was found in Charleston County this week, so growers should be scouting their cucumbers, squash, and other cucurbit crops to find and treat for disease before they wipe out the crop.” This basil is growing very well on the Coast.
Zack Snipes, ©2022, Clemson Extension

Justin Ballew reports, “Some areas got a little rain last week, but it didn’t provide much relief. The Midlands remain very dry. Several strawberry growers have started to call it a season on their strawberries and have begun to terminate fields. Some berries are still being picked and will continue for another couple of weeks, so go buy them while you can. Other crops are growing well, though we are seeing some disease. Southern blight has been showing up in tomatoes and strawberries, and we’re seeing some black rot in brassicas. Deer seem to be especially hungry for cucurbits right now. We’ve seen them hit some cucumbers, squash, and cantaloupe pretty hard. My guess is they are looking for something tender with high moisture content due to how dry it is.” Southern blight developing around the stem of a tomato plant. Wilting is usually the first clue that southern blight is attacking a plant.
J. Ballew. ©2022, Clemson Extension

Sarah Scott reports, “Peaches are coming in really well right now. Even though we have had some rain events here and there, it is still relatively dry. Growers are irrigating trees closest to harvest. Brown rot has been popping up in some areas. Rotating fungicides can help keep the spread down. Refer to the peach spray guide for options depending on your level of disease pressure. Japanese beetles have also been showing up in the orchards over the last 2 weeks. A photo sent in by one of our peach growers shows, what seems to be, a population of thynnid wasps. These “wasps attack scarab beetles, including Japanese beetles”, according to peach entomologist Brett Blaauw. There are options for treatment if beetles in the orchard are high in population, but I mainly just wanted to share the photo in case anyone else saw this and was curious. Kerrie Roach reports, “Strawberries are on the way out of the Upstate, with most growers pulling their plants at this point in the season. Ensure all debris is removed from the field to help prevent carryover of disease issues to next season. Growers should be planning for next year and have orders in, or in the process of ordering at this point.  Most of our early peach varieties got hit by cold weather in early spring, so peaches are still a few weeks off. Apples are looking good. If you haven’t done any chemical thinning, now is the time to get in there with some hand thinning. Some varieties are showing some mid-season leaf drop, potentially from the dry weather and nutrient deficiencies because of the lack of water. Squash and cucumber harvesting has begun. Random heavy rain showers have increased disease pressure, so monitoring and management are vitally important at this point.”

Andy Rollins reports, “The blackberry crop is beginning harvest, although it’s light. Small farms with raspberries are also being harvested. We are seeing some white druplets. This can be caused by genetic and environmental issues in raspberry and blackberry. Commercial sales can be affected, but it is just aesthetic. The taste, I assure you, was excellent. The peach crop is progressing well, but we are finding some split pits caused by cold damage. In some cases, the seeds inside of the pit are fine, and eating quality is good. We are finding some damage from Japanese beetles on peach and other fruit and vegetable crops.” 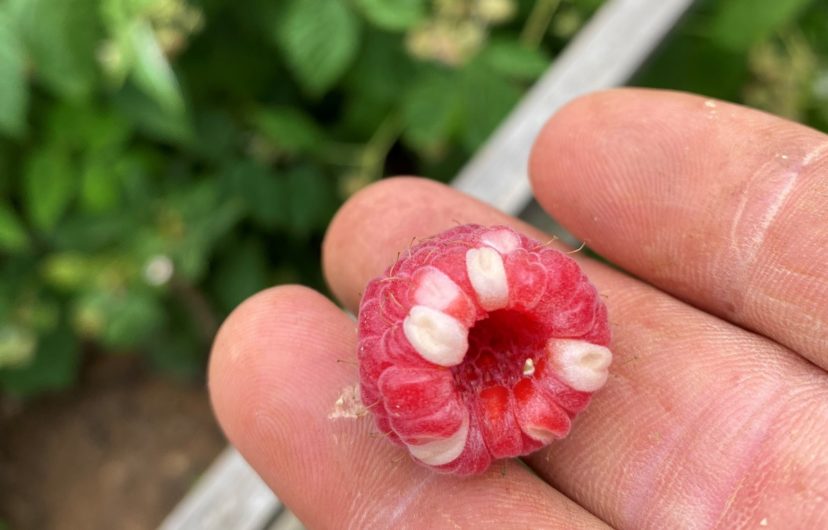 White druplets in raspberry. This is just an aesthetic condition and does not affect the taste.
Andy Rollins, ©2022, Clemson Extension