When deciding upon which trees and shrubs to plant in the landscape, I always suggest that gardeners consider plants that offer more than one season of interest. This aspect of consideration is usually not taken into account by most of the people that I speak with, but it certainly should. Especially since there are so many great trees and shrubs that help to brighten up the often-dreary winter landscape. There are several shrubs that flower in winter, some that display vibrant fruit, have interesting form or beautiful bark. 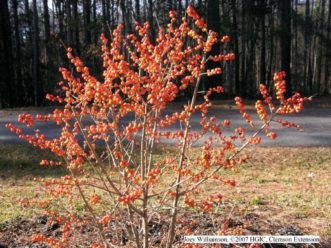 Winterberry Holly (Ilex verticillata): This native, deciduous holly is a time-tested old favorite in many gardens. While this shrub has been on countless listings of plants with winter interest, there are some cultivars on the market these days that might be worth a look. Proven Winners is marketing a new winterberry holly called Berry Poppins® (‘FarrowBPOP’). These plants are dwarf, maturing at only three to four feet instead of the typical six feet or more in others. The fruit is bright red and is retained on the plant from fall through winter. Since hollies are dioecious, or having male and female flowers on separate plants, a pollinator will need to be planted amongst the females. To fill this role, a dwarf male cultivar marketed as Mr. Poppins® (‘FarrowMRP’) is available through Proven Winners as well. The old standard (full size) pollinators are two cultivars sold as ‘Jim Dandy’ and ‘Southern Gentleman’. One male planted per five female plants is sufficient for ample fruit set. These dwarf winterberry hollies are perfect for smaller landscapes, and are an adaptable plant that will tolerate damp or dry soils. Those bright red glossy fruits can be used in cut stem arrangements for the holidays as well. Paperbark Maple (Acer griseum): This small tree, native to central China, is a superb choice for all seasons with great fall color and a pleasing habit. However, the gorgeous cinnamon-colored exfoliating bark is an absolute stunner in winter. These trees are slow growing, and will likely mature to a height of 20 to 30 feet tall with a rounded canopy. As an added bonus for us in the Carolina midlands, these trees are tolerant of acidic soils as long as they are well drained. Paperbark maple is difficult to propagate in the nursery, so they are not inexpensive or widely available. More gardeners should plant and enjoy these trees as a specimen in their landscape. Hybrid Witchhazel (Hamamelis x intermedia): It is a matter of subjectivity as to whether one considers this a large shrub or a small tree. I tend to refer to this group of witchhazels as shrubs. That said, this is an absolute thriller in the cold days of February when winter will seemingly not end and cabin fever is at its peak. Hybrid witchhazels offer us interesting form, attractive bark, beautiful fall foliage and an intriguing floral display in winter. These hybrids are a result of crossing two species: Japanese witchhazel and Chinese witchhazel. There are dozens and dozens of named cultivars out there, but the reality is that only a handful would be considered widely available. In general, these plants will grow to 15 or 20 feet tall with about an equal spread. They are adaptable, but do prefer a slightly acidic, well-drained soil. If I were forced to say which of these hybrid witchhazels is my favorite, it would likely be ‘Jelena’, sometimes also referred to as ‘Copper Beauty’. There is a fine specimen of this growing on the campus of Spartanburg Community College that I make a point of observing every February. It has an upright spreading habit, consistently good fall color and a dazzling floral display in February. This cultivar also has a faintly sweet, yet spicy aroma to the flowers as an added bonus.