Brown patch and large patch are probably the most common and damaging diseases of cool-season and warm-season turfgrasses, respectively, in South Carolina. The beauty of all South Carolina lawn grasses can be quickly destroyed by these diseases, which are each caused by a different strain of the fungal pathogen, Rhizoctonia solani. These diseases can rapidly develop when there is an extended period of leaf wetness, and the temperatures are suitable for disease development.

Generally, symptoms of brown patch begin on cool-season grasses (tall fescue, ryegrass, bluegrass, and bentgrass) during the late spring and can continue during the summer. It may also occur on these grasses during warmer periods of the winter months.

Warm-season grasses most commonly affected by large patch are centipedegrass, zoysiagrass, and St Augustinegrass. Typically, bermudagrass is not as severely damaged as are the other warm season turfgrasses because its rapid growth and spread allows it to recover more quickly. The fungus causing large patch disease is most active during the late fall and again during the spring. However, most symptom development occurs in spring during the green-up of the lawns.

Symptoms of brown and large patch diseases may vary greatly with the type of grass and soil conditions. The diseases usually cause thinned patches of light brown grass that are roughly circular in shape. These areas range in diameter from a few inches to several feet. Damaged areas may coalesce or merge. Many times the turfgrass in the center of the patch will recover, resulting in a doughnut-shaped pattern. However, during conditions that are favorable for rapid disease spread, large areas of the lawn may be thinned and killed without the formation of noticeable circular patches. This type of pattern is commonly seen on infected St. Augustinegrass when grown in shady, moist locations. 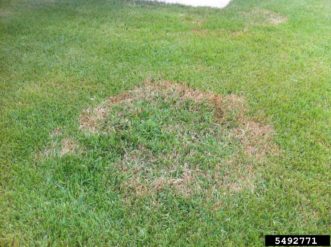 Large patch disease often becomes evident in the spring, as St Augustinegrass (above) and other warm season turfgrasses green-up. The center of this diseased area has begun to recover as the fungal activity is moving outward and because the disease primarily targets the above ground portion of the turfgrass.
Matthew Zidek, Texas A&M AgriLife Extension Service, Bugwood.org 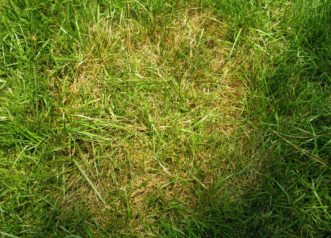 Infected warm-season grasses rarely have leaf spots but instead have rotted leaf sheaths (where the leaf blades attach to the stem) near the soil surface. Therefore, it is diagnostic for the disease if one tugs gently on the leaves in the recently discolored perimeter and the blades pull free.

All types of warm-season or cool-season lawn grasses grown in South Carolina can be affected by large patch or brown patch, respectively. Unfortunately, there are currently no turfgrass species entirely resistant to these diseases available.

The best way to prevent brown patch or large patch in the home lawn is by following good lawn care practices. This is much easier and less expensive than the use of fungicides and can be very effective.

Fungicides can be difficult to rely upon for controlling brown patch and large patch in the home lawn, but regular applications can vastly improve the lawn appearance.

Preventatively, fungicides should be applied to turfgrass tall fescue in the spring and early summer. Frequently brown patch symptoms become obvious around the first week of May in the Upstate. Curative treatments may need to be made regularly during the summer if rainfall is frequent.

Typically, applications are made at 14- to 28-day intervals, depending upon the fungicide. If the disease is severe enough to warrant chemical control, select one of the following fungicides listed in Table 1. It will help in disease control to alternate fungicides used with each subsequent application to prevent a buildup of resistance to a fungicide. Slightly better control may be obtained by a liquid spray fungicide application rather than by a granular application of the same fungicide active ingredient. Granular fungicides are easier to apply, but they must be irrigated after application with ½ inch of irrigation water or rainfall (follow product label directions).

Pesticides are updated annually. Last updates were done on 07/22 by Adam Gore.