Widow spiders are among the most recognizable spiders in the United States.  In South Carolina, there are three widow spiders: the Southern black widow, the Northern black widow, and the brown widow. While widow spiders can create concern for many people, the chances of being bitten can be greatly reduced by knowing what to look for and by taking some simple steps for their control. 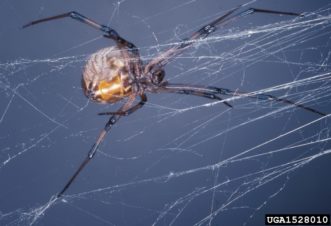 The brown widow is a widespread species found in the tropical areas. In the United States it was introduced into Florida and is now found throughout the state. The brown widow’s range has been expanding northward and it has recently become established in parts of South Carolina.  In the late 1990’s, it had been reported in Charleston and Beaufort, although infrequently.  Since the summer of 2002, more reports of their presence have been made in numerous areas of South Carolina

Brown widow spiders are gray to brown in color with white and black markings on the top surface of their bulbous abdomens.  The “hourglass” marking on the under surface of the abdomen is yellow to orange, and the legs have dark bands.  This species is found in urban areas and may be encountered around the home including: under roof eves, under railings on porches, in abandoned cars, under unused flowerpots, in piles of firewood, and under outdoor chairs.

The mature female of the brown widow spider is from 1 inch to 1 ½ inches long (with legs extended) and can live 1 to 2 years.  In her lifetime, she can lay 10 to 20 eggs sacs with each sac containing approximately 250 eggs.  The egg sac of the brown widow spider is white to tan in color and is covered with pointed projections, much like the seed of a sandspur.   The egg sac is ½ inch in diameter and is found attached to the web of the female.  The egg sac of the black widow, which is similar in color, has a smooth surface.

Females molt 6 to 9 times before reaching maturity, while the male brown widow molts 3 to 6 times before reaching maturity.  Males are much smaller than the female (1/2 to 3/4 inch long, with legs extended), do not live as long as the female, and have not been recorded to bite. All three widow spiders in South Carolina are shy and will try to flee rather than bite a human.  Cases of widow bites occur when a spider is pressed against the skin of a person (when putting on clothes or shoes) or when a hand is reached into dark areas where the spider is present. It has been reported that the venom of the brown widow is as toxic as the black widow spider, but they are less likely to bite and do not defend their webs as vigorously as black widows.

As with black widow spiders, brown widow spider control requires sanitation and elimination of nesting sites.  Inside the house, garage, and porch, brown widow spiders, their egg sacs, and webbing should be removed with a vacuum cleaner.  After cleaning, the bag should immediately be removed, placed in a sealed plastic bag, and disposed of in outdoor trash bins.  As an added precaution, bags containing spiders and egg sacs can be placed in a chest freezer for several hours.  Regular inspections and routine cleaning (wearing gloves) of the areas the spiders have been previously found should occur in and around the home. Areas with excess clutter should be eliminated, as this will discourage spiders from nesting.  Empty containers outside the home (flowerpots, buckets) and firewood should be moved away from the house or removed.  Cracks, holes, and spaces around doors and windows should be sealed.  If spiders remain after sanitation and elimination of nesting areas, insecticides may be required.  Treatment with aerosol sprays containing insecticides labeled for spiders will kill spiders when directly applied to them.  Spot treatment with insecticidal dusts in cracks and crevices where spiders build their webs may also help with control.