There are six Aesculus species that are native or are established in South Carolina, especially in rich, moist (mesic) woodlands, along river edges and ravines. Probably the most commonly encountered throughout South Carolina is the native red buckeye (Aesculus pavia var. pavia), which is a small tree with bright-red, tubular flowers in March. Other equally impressive species are the painted buckeye (A. sylvatica), yellow buckeye (A. flava), bottlebrush buckeye (A. parviflora), Ohio buckeye (A. glabra var. glabra) and common or European horsechestnut (A. hippocastanum). Often these five species are found at higher elevations in partially-shaded sites where hardwood forest soils are somewhat calcareous and therefore less acidic. The genus Aesculus, along with maples, have now been included in the soapberry family, Sapindaceae.

Buckeye and horsechestnut plants are easy to recognize with their palmately-compound leaves. That is, their compound leaf has (typically) five leaflets that radiate from the petiole-like fingers from the palm of the hand. The red, painted and bottlebrush buckeyes are small trees, but Ohio and yellow buckeyes and horsechestnut may grow quite large. Their fruit have tough, leathery husks (capsules) that contain usually one to three hard, shiny seeds. Although these seeds, called buckeyes, resemble chestnuts, they are not edible and in fact are quite poisonous. Buckeye seeds are dark brown with a pale scar and somewhat resemble the eye of a male (buck) deer.

Red buckeye is a fast-growing, large shrub or small tree that reaches from 15 to 20 feet tall and 15 to 25 feet wide. Buckeyes naturally grow best in rich, moist, but well-drained sites and under partial shade as an understory plant. These soil and light requirements need to be matched in the landscape site. Because it is not extremely drought tolerant, choose a moist site or irrigate buckeyes weekly as needed during the summer. Although red buckeye will flower under shady conditions, the foliage will be denser, and plants will produce more flowers with adequate sunlight. Typically, morning and early afternoon sun with late afternoon shade will be best. Many South Carolina soils may need to be limed for best buckeye growth. Plants should be mulched to maintain soil moisture. Flowers are 1½ inches long, typically bright-red and held in clusters 6 to 10 inches tall. Flower panicles emerge between mid-March and early April with new foliage, and buds begin to open 2 to 3 weeks later. Operation Hummingbird in York County, SC ranked the red buckeye in its top ten best hummingbird-attracting plants for our state. Red buckeye is one of the first plants with red tubular-shaped flowers of the season. Butterflies also visit the blooms for nectar.

By October, red buckeye trees will be covered in clusters of ripe 2- to 3-inch diameter fruit. The smooth, leathery capsules begin to split to reveal and release the lustrous, hard seed in mid-October.

Planting buckeye seeds is the best way to grow additional plants. The seeds must not be allowed to dry, but should either be planted outdoors immediately or stored in a refrigerator in bags with moist sphagnum moss to provide the 3 months of stratification (cold and moist treatment) needed for germination. If refrigerated, plant seeds outside in early spring. Seedlings may flower in 2 to 3 years.

Painted buckeye is also a native, understory shrub or small tree as is the red buckeye. They typically grow from 6 to 15 feet tall, and may be found in the wild in the Piedmont of South Carolina. It is found in mesic upland or bottomland forests with adequate soil moisture. 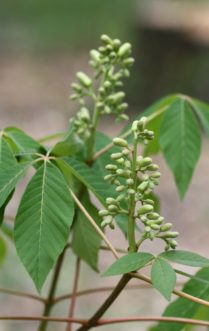 Time of flowering is late March to early April and coincides with flowering of the red buckeye. Their flowers are very similar to the latter, but are cream, light pink or yellow-green. Flowers often have yellow, salmon or reddish coloration on the upper petals. Sometimes darker pink flowers may be found, and this may be due to hybridization with the red buckeye. The flowers are a nectar source for hummingbirds and butterflies. Like other buckeyes, the painted buckeye is poisonous and deer resistant.

Flower buds on panicles arise in mid-March with the appearance of new foliage, and this species is one of the first trees to produce leaves and flowers in the Piedmont. Flower buds are yellow-green. Fruit is a smooth, leathery capsule and contains 1 to 3 lustrous, dark brown seeds.

Bottlebrush buckeye is more of a shrub than the other buckeyes, as it is a mounding, spreading, multi-stemmed plant. Although not invasive, mounds of this buckeye slowly widen as new upright sprouts arise from underground runners. Bottlebrush buckeye grows from 6 to 12 feet tall and spreads eventually to as much as 8 to 15 feet wide. This native shrub is an understory plant, and grows best in part shade. Like other buckeye species, the soil must be moist, but also well-drained. In the wild, bottlebrush buckeye grows in hardwood forests along river bluffs, which gives these exact conditions of part-shade, well-drained soil, and yet consistent soil moisture. 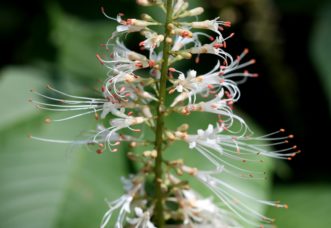 Creamy-white flowers are produced on 10- to 12-inch tall, cylindrical panicles in late June and flowering lasts as long as 3 weeks. The long stamens of each flower extend far beyond the petals and give each 3- to 4-inch wide flower panicle the shape of a bottle brush. These flowers are attractive to both hummingbirds and butterflies, such as the Eastern Tiger Swallowtail.

The fruit that form and mature in the fall are smooth, pear-shaped, leathery capsules, and each contains 1 to 3 hard, shiny seeds. Bottlebrush buckeye may be grown from seed if they are immediately planted when ripe. This species may also be propagated from underground stems (stolons) that allow the shrub to spread. These stolons produce both roots and an above ground stem at specific points called nodes. Sections of stolons with nodes may be dug and transplanted. Common horsechestnut is also called European horsechestnut as it is extremely common in Western Europe and is native to parts of southern Europe and southern Asia. Horsechestnut grows best in well-drained soils in partial shade, but will grow in full sun. Often the foliage becomes scorched under summer drought conditions when growing in full sun, so a part-shade landscape site is best. This species grows to become a large tree at 60 feet tall and 60 feet wide.

Bloom time is spring, with trees in full bloom by mid-April in the Piedmont. These white to pink flowers are much more open than those of the painted or red buckeyes, and flowers have a prominent yellow blotch. Horsechestnut fruit are spiny, leathery and contain one or two shiny brown seeds, which are called conkers in Europe. Yellow buckeye is a large, native tree that may grow from 50 to 75 feet tall and 30 to 50 feet wide, and prefers rich, well-drained soils. The preferred soils are the mesic soils of hardwood forests, with slightly acidic to neutral soil pH. Its native range is mostly over the central Appalachian Mountains, and is found at higher elevations in western South Carolina. It is common in the Great Smoky Mountains and found in coves, river bottoms and on northern slopes. It is a shade tolerant species. The foliage may scorch if planted in full-sun and exposed to drought conditions.

Flowers are tubular-shaped, as are those of the red and painted buckeyes, and pale-yellow. The showy upright flower clusters range from 4 to 8 inches tall. Only the lower flowers of each cluster are perfect and produce fruit, as the upper flowers are staminate and produce additional pollen to help assure fruit set. The stamens do not extend beyond the petals. Aesculus flava will hybridize with A. glabra var. glabra, the Ohio buckeye.

Fruit are found in clusters in autumn, and are smooth, thick, leathery capsules that contain from 1 to 3 chestnut-brown, shiny seeds. Fruit are 2 to 2½ inches in diameter. Seeds need to be planted in rich, deep woods soil, and not allowed to dry out before planting. As with the other buckeyes, Ohio buckeye grows best in deep, rich, well-drained soils in part-shade. They are prone, as are other buckeye species, to leaf scorch if sited in full sun and under drought conditions. Higher elevations of South Carolina are at the bottom end of the range for Ohio buckeye. This species also thrives in mesic hardwood forests in ravines and along stream banks which provide constant soil moisture. Typically, Ohio buckeyes grow as small to medium-sized trees to 30 to 50 feet tall.

Ohio buckeye flowers are creamy to greenish-yellow and held in upright terminal panicles, and flowering occurs in early spring. Stamens extend beyond the petals. The fruit are warty or spiny, leathery capsules that usually contain just one hard, shiny, dark brown seed that matures in October. These are the most common buckeyes carried for good luck.

Red horsechestnut is a hybrid between red buckeye (A. pavia var. pavia) and common horsechestnut (A. hippocastanum) and is an outstanding medium-sized flowering tree. At maturity the red horsechestnut may reach 30 to 45 feet tall and wide. Bloom time is in late April in the Piedmont, and the showy intense-pink flowers are held in 8-inch tall, upright panicles. This hybrid buckeye is best suited for part-sun, but will grow in full sun if irrigation is provided. It tolerates restricted and compacted soils far better than its red buckeye parent. It has numerous landscape uses, such as a residential shade tree, in parking lot islands or in street medians. The hybrid may grow best in soils ranging from slightly acidic to neutral pH, so lime may need to be added to the planting area. There are a couple of cultivars currently available that offer very showy flowers. ‘Ft. McNair’ has bright pink flowers, each with a yellow blotch. The flowers are not tubular like those of the red buckeye, but are quite open and showy like those of its common horsechestnut parent. ‘Briotii’ has deep scarlet flowers held in 10-inch panicles.

‘Ft. McNair’ red horsechestnut does make small, spiny, oval-shaped fruit in the fall. Propagation by seed does result in plants very much like the cultivar, which is very unusual for a hybrid. ‘Briotii’ does not make fruit.

Other than leaf scorch that occurs from being grown in full sun under drought conditions, the main problem that is common among buckeyes is Guignardia leaf blotch caused by the fungus Guignardia aesuli. This leaf blotch affects most buckeye and horsechestnut species, including red buckeye, painted buckeye, Ohio buckeye, red horsechestnut, and common horsechestnut. However, yellow buckeye and bottlebrush buckeye do not seem to be as affected. The leaf blotches are irregular-shaped, initially pale-green and then turn reddish-brown. The leaves become twisted and wrinkled as the disease expands, and premature leaf drop occurs. The disease is more severe during rainy spring and summer seasons, and the primary infections occur in the spring. Once the disease has occurred on Aesculus species, it is important to rake up and dispose of fallen leaves before the spring growth appears. The fallen leaves are the primary source of inoculum because of spores that are produced on the leaf spots. They are wind-blown and splashed by rainfall onto new leaves in the spring.