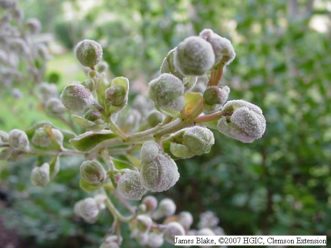 Powdery Mildew: Powdery mildew is one of the most common problems of crape myrtle, and it is caused by the fungus Erysiphe lagerstroemiae. Patches of white to grayish powdery growth occur on the surfaces of leaves, flowers, and new shoots. Heavily infected flowers may fail to open. Infected parts of the plant become distorted and stunted. The disease is most serious in shady, damp locations, especially where plants are crowded and air circulation is poor. Development of the fungus is favored by high humidity at night and dry, mild daytime conditions, as often occur during the spring and fall.

Prevention & Treatment: The most effective control measures include locating plants in full sun, removing sprouts from the base of the plant, and planting resistant varieties. Susceptible varieties of crape myrtle should be avoided. Removing diseased twigs and branches may be possible if only a few shoots are infected. Remove sprouts (suckers) at the base of the plant as they occur since they are very susceptible to powdery mildew. Once these sprouts become infected, the fungus easily spreads to the upper portions of the plant.

Plant Resistant Varieties: The extent of resistance to powdery mildew for a particular variety may vary from location to location and may depend on particular conditions occurring in the environment.

If the disease is severe enough to warrant chemical control, select a fungicide containing one of the following: myclobutanil, propiconazole, thiophanate-methyl, or copper-based fungicides (see Table 1 for specific products). Multiple applications may be required. Apply all chemicals according to the directions indicated on the label.

Cercospora Leaf Spot: Leaf spots caused by Cercospora lythracearum may appear on crape myrtles and are caused by the fungus Cercospora species. This disease typically occurs during periods of warm, moist weather. Yellow spots (⅛ to ¼ inch diameter) appear on the upper leaf surface with white-grey sporulation of the fungus on the lower leaf surface. The disease can result in almost complete defoliation of the plant in late summer and fall in susceptible cultivars.

Prevention & Treatment: Select resistant varieties for new plantings. The varieties ‘Fantasy,’ ‘Tonto,’ ‘Tuscarora,’ ‘Tuskegee,’ and ‘Velma’s Royal Delight’ have exhibited resistance to Cercospora leaf spot in field trials. The amount of resistance may vary from location to location and may depend on particular environmental conditions. Provide good air circulation and avoid overcrowding plants. If the disease is severe enough to warrant using chemicals for control, thiophanate-methyl or myclobutanil as used for powdery mildew will control Cercospora leaf spot (see Table 1 for specific products). Apply all chemicals according to directions on the label.

Japanese beetle (Popillia japonica) is also a pest and feeds on both leaves and flowers. In addition to crape myrtle, it will feed on nearly three hundred different plant species. 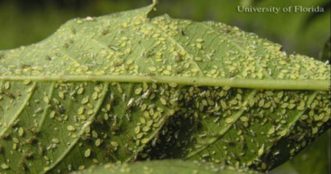 A heavy infestation of aphids on the underside of a leaf.
Image from John Herbert, University of Florida

Aphids feed by inserting their mouthparts into tender new leaves from which they suck plant sap. Plant sap has a high sugar content. When they feed, the aphids excrete large amounts of sugary liquid called honeydew. With a large aphid population, the honeydew can completely coat leaves. The honeydew serves as food for the sooty mold fungi (Capnodium species), as well as various insects, including ants, wasps, and flies.

As the aphid feeds, it injects saliva into the leaf. The saliva causes yellow spots to develop on the leaf. Their feeding on young leaves often causes leaf distortion. Buds, branch tips, and flowers can also be affected by feeding.

Several predators feed on the crape myrtle aphid. These include ladybird beetles (ladybugs) and their larvae (immature forms), green lacewings and their larvae, hover fly maggots, parasitic wasps, and entomophagous (insect feeding) fungi. As much as possible, these natural predators should be allowed to reduce aphid populations. In addition, many aphids can be removed from plants by spraying with a strong stream of water. Spraying with water may have to be repeated regularly, as needed.

As a result of their phenomenal reproductive rate, aphids are very difficult to control with insecticides. If a single aphid survives, a new colony can be produced in a short period of time. In addition, using insecticides means that beneficial predators will also be killed. If it is determined to be absolutely necessary, various insecticides are labeled for use by homeowners against aphids on crape myrtles. These include insecticidal soap, horticultural oil, pyrethrins, neem oil, permethrin, cyfluthrin, cyhalothrin, acephate, or malathion. Soil drenches of imidacloprid in the spring will control aphids and last longer within the plant to prevent future infestations by aphids and other insect pests (see Table 1 for specific products). As with all pesticides, read and follow all label instructions and precautions.

Japanese Beetles: Adult Japanese beetles are about ½ inch in length and coppery-brown in color with metallic green heads. They emerge from the soil and feed from May to August. They lay their eggs in the soil. Grubs hatch from the eggs and feed on grass roots. As the weather cools, the grubs move more deeply into the soil to overwinter.

Both adult beetles and their larvae (grubs) can seriously damage plants as a result of their feeding. Adult Japanese beetles eat flowers and skeletonize leaves (eat leaf tissue between the veins, resulting in a lacy skeleton remaining). The grubs feed on the roots of plants, especially on the roots of grasses.

Control: Multiple approaches are necessary for controlling Japanese beetles. Adults can be handpicked and drowned in a pail of soapy water. Japanese beetle traps are available commercially or can be homemade. They may be effective at reducing adult populations.

Keep traps at least 50 feet from the crape myrtle tree, or you may create more of a problem by attracting them to the area. Milky spore, Paenibacillus popilliae, is a disease-causing bacterium that is effective against grubs of Japanese beetles that live in the soil and feed on turfgrass roots, but not the adults. It is commercially available for homeowner use. Many products containing neem oil, cyfluthrin, permethrin, cyhalothrin, or acephate are labeled for use by homeowners against Japanese beetles on crape myrtles. Soil drenches of imidacloprid in the spring will greatly reduce damage by Japanese beetles and last longer within the plant to prevent future infestations by additional pests (see Table 1 for specific products). As with all pesticides, read and follow all label instructions and precautions. 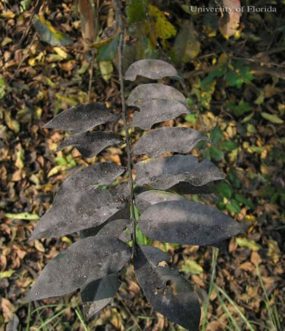 Sooty Mold: Leaf and stem surfaces are covered with a black sooty substance, causing them to appear black and dirty. Sooty mold indicates that there is an insect problem on the plant. These common molds are caused by fungi that grow on the sugary substance called honeydew, produced by various insects that suck sap from the plant. Aphids, scales, mealybugs, and whiteflies most commonly cause this problem.

Prevention & Treatment: Sooty molds are unsightly but are relatively harmless since they do not directly attack the plant. Controlling the insect problem can reduce excessive amounts of sooty mold. Reduce aphid numbers by allowing beneficial insects, such as lady beetles, to inhabit the plant. Aphids can be removed from the plant with a strong spray of water.

Although not necessary, sooty mold can be washed from the leaves by spraying foliage with a dish soap solution (4 ounces per gallon of water), waiting three to four minutes, and then rinsing the foliage with a strong stream of water. 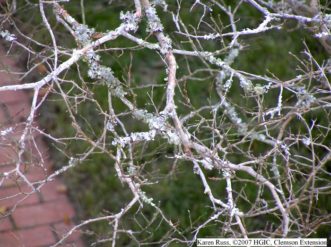 Lichens: A lichen is an unusual organism composed of a fungus and a green alga and/or a cyanobacterium living together in the same body. Lichens often appear as green to gray-green leafy or crusty growths on the trunks or branches of plants. Typically, they occur in abundance on plants that are declining in health or vigor. They are harmless to the plant and are in no way responsible for the poor health of the plant. Less vigorous plants tend to be more open with less foliage, which increases sunlight penetration and subsequent lichen growth.

Prevention & Treatment: Controls are not necessary. Lichens will gradually disappear if the health of the plant is restored. However, there are a few consumer products with lichen control listed on their labels. They are:

All products say to apply only to the hardened bark of trees. They should be applied only to the bark and with no foliar contact. These products do not say for use on shrubs. All three are identical and contain 22.11% potassium salts of fatty acids. RTS means they are in a hose-end sprayer bottle.