Aphids and whiteflies both have piercing, sucking mouthparts used to suck the sap out of eggplant leaves and stems. Both pests are primarily found on the undersides of the leaves. As they feed, they secrete a sticky waste known as honeydew. Dark-colored sooty mold often develops on the honeydew, which reduces the plant’s ability to photosynthesize. The silverleaf whitefly (Bemisia argentifolii) is the predominant species of whitefly that affects eggplant, and the green peach aphid (Myzus persicae) is the predominant aphid species. 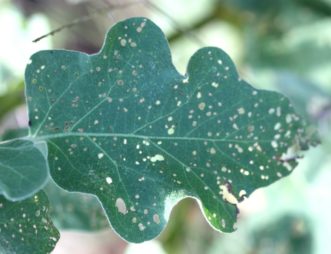 Eggplant is a favorite host of multiple species of flea beetles, which are mostly in the genus Epitrix. Flea beetles have chewing mouthparts and feed on leaves, making small, shot-like holes. Their damage is most serious when the plants are small and have just a few leaves. Once the plants are larger, a fair amount of injury can be tolerated.

Colorado potato beetle (Leptinotarsa decemlineata) larvae and adults feed on eggplant foliage with their chewing mouthparts. Populations can build up quickly and cause significant defoliation and yield loss. In small gardens, adults and larvae are easy to handpick and squish or drop in a bottle of soapy water. In larger gardens, chemical control may be necessary. 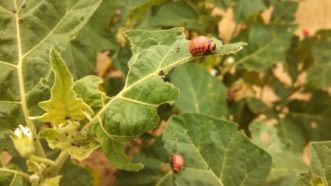 Tobacco hornworms are harmless and can easily be removed by hand.
Justin Ballew, ©2020, Clemson Extension

Tobacco hornworms (Manduca sexta) and tomato hornworms (Manduca quinquemaculata) are large caterpillars capable of rapidly eating large amounts of foliage. They use their chewing mouthparts to feed, leaving behind little more than the large leaf veins. Just a few hornworms may cause significant defoliation in small gardens. The horn on the rear end is harmless; therefore, remove hornworms by hand when found. 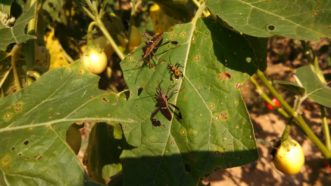 Stink bugs (various species in the insect family Pentatomidae) and leaf-footed bugs (Leptoglossus phyllopus) feed on young developing fruit by inserting their piercing, sucking mouthparts. This frequently leads to a discolored spot beneath the skin that becomes evident when the fruit is sliced. The spot may be depressed on the outside of the fruit. Both juveniles and adults feed on developing fruit. Small amounts of feeding damage often go unnoticed, though populations may occasionally build up to problematic levels.

Two spotted spider mites (Tetranychus urticae) may become a pest on eggplant foliage, especially after the use of broad spectrum insecticides. Typically, spider mites feed on the lower surfaces of leaves by inserting their piercing, sucking mouthparts, and extracting the plant’s sap. Populations may increase rapidly in times of hot, dry weather. Large populations may create webbing on the foliage and cause a yellow stippling symptom to develop on the foliage as they feed.

Strategies for Insect Management in Eggplant

Cultural control includes proper fertilization according to the results of a soil test. Avoid over fertilizing with nitrogen, as this can make plants more attractive to aphids. In addition, manage weeds before they begin flowering and producing seeds in and around the garden, which may harbor insect pests and provide overwintering sites.

Mechanical control includes handpicking insects. This is an easy strategy for larger, slow-moving insects, such as hornworms and Colorado potato beetles. Pick the insect off the plant and squish it or drop it in a bottle of soapy water.

For chemical control, see products labeled for use in eggplant in the tables below.

Table 1. Insecticides for Control of Insect Pests of Eggplant.

Phytophthora blight (caused by Phytophthora capsici or P. nicotianae) is a water mold that may attack eggplant roots, leaves, stems, or fruit. Symptoms include dark streaking on the upper branches of the plant, followed by the rapid collapse of the plant and death. Avoiding excessive soil moisture is an important strategy for managing Phytophthora diseases.

Bacterial wilt (caused by Ralstonia solanacearum) is a serious bacterial disease that causes sudden wilting of the plant. The entire plant withers and dies quickly following infection. The pith inside the stem turns reddish-brown, and there is relatively little yellowing of the leaves. To avoid bacterial wilt, do not plant eggplant in areas that have had tomatoes, Irish potatoes, or eggplant planted in the previous three years. Proper crop rotation is important in helping to avoid the buildup of soilborne pathogens. Several eggplants that have wilted and died because of infection by bacterial wilt.
Justin Ballew, ©2020, Clemson Extension 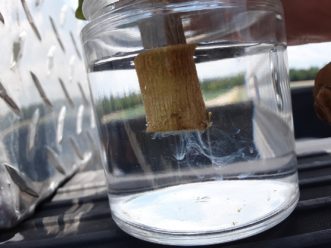 Bacterial ooze streaming from the cut stem of an eggplant suspended in water is a good way to test for bacterial wilt.
Justin Ballew, ©2020, Clemson Extension 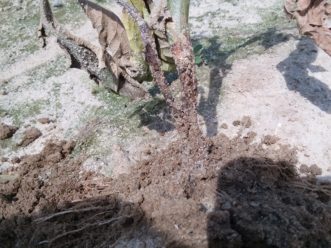 Symptoms of southern blight (caused by Athelia rolfsii) are found on the stems at the surface of the soil. As the disease progresses, a white mat of fungal mycelium (threadlike growth) develops around the base of the stem, rotting the stem and causing the plant to yellow, wilt, and die. Small, round, brown and tan pellets called sclerotia, which are the survival structures, form and drop into the soil. Sclerotia remain viable in the soil for several years until the next susceptible crop is planted. Avoid planting in areas where tomatoes, peppers, snap beans, or eggplants were planted in the last 3 years. In addition, remove infected plants from the garden. Phomopsis blight (caused by Phomopsis vexans) is a fungal disease that most commonly attacks the fruit, but the collar rot stage can cause the stem to become narrower than normal and break off at about 1 to 2 inches above the soil line. Leaves may also have gray or brown spots that are rounded or oval-shaped. Fruit spots start as pale, sunken areas that rapidly enlarge to become soft and spongy down into the flesh. Phomopsis blight is more common in the fall than in the spring.

Strategies for Managing Diseases in Eggplant

Crop rotation is an important strategy for managing bacterial wilt, Phytophthora blight, and southern blight because the pathogens survive in soil. Avoid planting eggplant where tomatoes, potatoes, peppers, or eggplant (all members of the Solanaceae family) were planted within the last three years. Instead, rotate with cucurbits (squash, zucchini, melons, and cantaloupe), brassicas (collards, kale, cabbage, turnips, and broccoli), grasses (sweet corn and grains), alliums (onions, garlic, and leeks), etc.

Proper plant spacing allows air to flow between plants, promoting faster drying of foliage following rain or dew. This is helpful in reducing foliar diseases and fruit rots. Space rows 36 inches apart, and space plants 24 to 30 inches apart on the row. Align rows east to west rather than north to south to allow air movement up and down the rows.

Proper water management is important for avoiding a variety of disease issues. Drip irrigation is the preferred method of watering versus overhead watering, as this keeps water off the foliage and fruit, reducing the severity of foliar diseases and fruit rots. If unable to drip irrigate, direct water to the base of the plants and avoid wetting the leaves as much as possible. Additionally, water early in the day to give the foliage a chance to dry before dark. Water frequently enough to keep the soil moist but not saturated. Excessive soil moisture increases the incidence of root rots and blight caused by Phytophthora and Pythium.

For chemical disease management, see products labeled for use on home garden eggplant in the tables below.

Table 3. Fungicides for Use in Home Gardens for Eggplant Disease Control.