Lantana is commonly grown as a sun-loving flowering annual in South Carolina. A few cultivars are reliably perennial throughout much of the state. More are perennial near the coast. All are tough, resilient plants that thrive in hot weather and bloom profusely from spring until frost. Some cultivars grow to as much as 5 to 6 feet tall, forming large, bushy mounds while others stay low and spreading, reaching up to 4 feet wide, but only 1 to 2 feet in height. Some cultivars are more compact.

Lantanas generally grow rapidly. Some cultivars, such as ‘Miss Huff’, are extremely vigorous. If plants outgrow their assigned space, they tolerate trimming back well during the growing season.

Lantana is valued for its long season of reliable bloom. Many cultivars display multiple colors within each two-inch wide disc-shaped flower head. The flowers attract butterflies and hummingbirds.

Foliage is coarse, lightly toothed and rough to the touch. Crushed leaves have a pungent scent, so you may want to locate where the plant it will not spread across walks if the odor offends you.

Use lantana as annuals or perennials in flowerbeds or containers. Spreading cultivars are attractive as groundcovers or trailing over containers and walls.

Grow lantana in full sun. Lantana is tolerant of all soil types provided they are well drained and slightly acid. Lantana is tolerant to salt and is an excellent choice for plantings near the beach. Lantana prefers warm soil. Plant lantana in spring, at least 2 weeks after all danger of frost is past. Hardy lantanas will typically show no growth in the spring until soil and air temperatures are quite warm.

Water: Newly planted lantanas will need to be kept moist for the first few weeks until the roots have spread into the surrounding soil.

While established lantanas are drought tolerant, performance, bloom, and growth rate will be reduced if they are too dry for a long period. During their blooming period, give them a thorough watering once a week if they do not receive an inch of rain that week. Avoid overhead watering. Overly frequent overhead watering can make plant more susceptible to diseases and root rot.

Pruning: Prune lantana periodically during summer by lightly shearing the tip growth to encourage repeat blooming. Plants that have become too large for their allotted space may be pruned back by up to a third of their height and spread. Water and lightly fertilize newly cut back plants and they will return to bloom quickly.

Prune perennial lantanas back hard in spring (March) to remove old growth and prevent woodiness. Cut back to about 6 to 12 inches from ground level. Avoid hard pruning in fall as this can cause reduced cold hardiness.

Although lantana is generally a very low maintenance plant with few problems, some may occur, especially in improper growing conditions.

Lantana is susceptible to powdery mildew if grown in shade. Sooty mold, causing a blackish discoloration on the leaves is usually caused by infestation by whiteflies.

Root rot can be a problem if soil is poorly drained or plants are watered too frequently.

Lantana lace bugs cause leaves to appear grayish and stippled or to brown and drop. Caterpillar damage also can occur. Mites can be a problem, especially if plants are very dry.

Poor blooming is usually caused by too much shade or excessive fertilization. Plants that set berries may decline in bloom. Trim plants back to encourage new growth and flowering.

Sterile cultivars are desirable since they do not produce seed, and so stay reliably in bloom throughout the summer. Some of these cultivars may set a limited amount of fertile berries.

Unless noted otherwise, listed species and cultivars are not reliably hardy and will most likely perform as annuals.

Common Lantana Cultivars: Common lantana (Lantana camara) is the most widely grown species, with numerous cultivars. Plants tend to be large and mound shaped, although some have spreading habit. Many cultivars are hybrids with trailing lantana (Lantana montevidensis). In addition to cultivars listed, there are many others, and new cultivars frequently appear on the market. Weeping Lantana & Cultivars: Weeping lantana (Lantana montevidensis) has low vine like stems and grows 8 to 12 inches tall by 4 feet or more wide with lavender flowers. Weeping lavender is excellent for growing where branches can trail over a wall or container edge. It is generally hardy on the coast, and may survive many winters in the Columbia area. The crushed leaves have a peculiar odor somewhere between bitter citrus and the smell of gasoline. 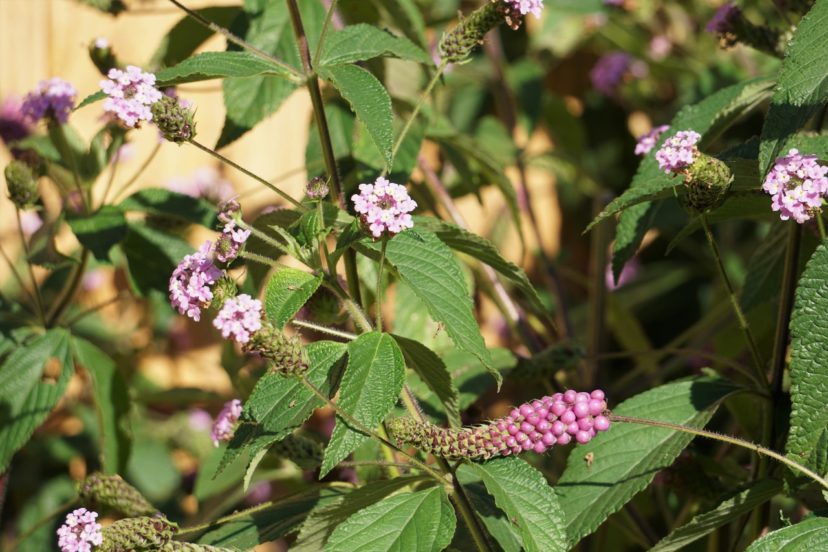