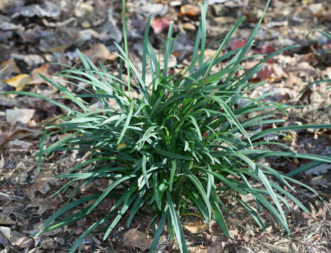 These two evergreen lilyturf species have slightly different growth habits and degrees of hardiness, but both are favorite landscaping plants. Both plants form mounds of grass-like foliage. Usually the foliage is dark green, but in some varieties it is variegated. There are many cultivars available. They differ in leaf color, size and flower color.

Most liriopes grow to a height between 10 and 18 inches. Liriope muscari generally grows in a clump form and will spread to about 12 to 18 inches wide. Liriope spicata spreads rapidly by underground stems (rhizomes) and will cover a wide area. Because of its rapid spread, L. spicata is not suitable for an edging but is excellent for groundcover. Lilyturf forms a dense evergreen groundcover with a grass-like appearance. It blooms in July to August with lavender, purple, pink or white flower spikes. Although the flowers are individually small, they are very showy, since each plant has many spikes of blooms. Clusters of bluish black berry-like fruit follow the flowers.

Liriope can be used as a groundcover under trees and shrubs and as a massed planting on slopes and banks. Liriope muscari and its cultivars can also be used as low edging plants along paved areas or in front of foundation plantings.

Liriope is remarkably tough. It will grow in deep shade or full sun, sand or clay. It can endure heat, drought and salt spray, but will not take “wet feet”; it requires moist, well-drained soil. Flowers are produced most freely in a sunny location.

Space the plants about 1 foot apart when planting. As the plants grow and mature, they can be dug and separated – usually this is done every three or four years if you want to increase your plants. Division is rarely necessary for the health of the plant.

You should mow off the foliage of these ground covers in late winter before growth starts with a lawnmower set at the highest possible cutting height. Be sure not to injure the crown of the plant when you mow, and be sure the mower blades are sharpened. It is important to prune liriope before spring growth begins – late January in lower coastal South Carolina and by mid-February in upstate South Carolina. Reddish-brown spots that appear along leaf margins and leaf tips are caused by a fungal disease known as anthracnose, which is caused by Colletotrichum species. This disease becomes more prevalent with frequent rainfall or overhead irrigation. It causes a rapid dieback of the foliage. The fungus can remain over-winter in dead foliage.

Mow or trim off last year’s leaves in late winter to a height of about 3 inches and remove as much of the debris as possible. Avoid over-watering or watering late in the day. This may be all that is needed to stop disease.

Leaf and crown rot is caused by Phytophthora palmivora (a water mold pathogen). ‘Evergreen Giant’ is a very common cultivar that is planted in the Southeast, and it is especially susceptible to leaf and crown rot. Initially with leaf and crown rot there will be a yellowing of the interior foliage. As the disease progresses, the basal leaf sections will turn brown, and then this discoloration will move further outward on the foliage. If plants are removed, an inspection of the root system will reveal discolored roots that are sloughing off their outer root tissue.

Liriope is also prone to root rot caused by Phytophthora, Fusarium oxysporum, or Rhizoctonia solani. As the root systems decays, the plants will discolor from the base upwards. Root rot may occur in sites that have poor drainage or are over-watered.

Plants that are showing symptoms should be removed and disposed of immediately before there can be further spread of the disease. Fungicides will not cure the plants of this disease, but only slow its progression. Fungicide treatments will leach from the soil after a few weeks, and then the disease will reappear. When planting liriope, do not install plants too deeply where the crown of the plant is buried. Keep liriope healthy by watering weekly as needed during summer droughts, don’t over-apply mulch next to plants, and don’t over-fertilize. When fertilizing, scatter fertilizer around plants but don’t let fertilizer granules become wedged between leaves. These things can all stress and predispose liriope plants to become infected with leaf and crown rot. Do not plant liriope in poorly drained sites.

Liriope scale (Pinnaspis caricis) or fern scale (P. aspidistrae) may infest liriope and causes chlorotic spotting (yellow) or reddish spotting of the leaves and foliar necrosis. Cut back the foliage in the late winter and clean up the clippings to significantly help in scale control. Thoroughly wet the infested liriope with a 2% horticultural oil spray (5 tablespoons per gallon of water) after pruning to aid in control.

Big Blue Lilyturf (Liriope muscari): This lilyturf grows in a clump form, making it well-suited for edging. The leaves are a little wider (3/8 to ½-inch wide) and the flowers somewhat bigger than those of creeping lilyturf.

The leaves are more narrow (1/4-inch wide) than on L. muscari. This habit makes it ideal for a lawn replacement or erosion controlling groundcover. It can be invasive in the wrong location. The flowers are smaller and lighter in color.

Mondo grass (Ophiopogon species) is similar in use and appearance to lilyturf. You can find information on mondo grass in HGIC 1110, Mondo Grass.