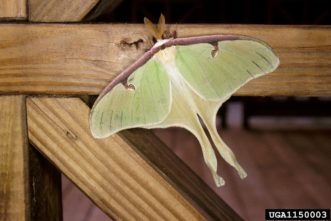 The Luna Moth (Actias luna), with its incredible size (3-4.5-inch wingspan), sea-foam green to yellow color, and long tails, is one of the most spectacular moths found in North America. Also known as the American Moon Moth, Luna moths are common throughout South Carolina. The name is derived from Luna, the Roman moon goddess. Luna moths are considered saturniid moths, referring to the use of wing patterns as a defense mechanism against predators. Like most moths, Luna moths are predominately active at night (nocturnal), but sightings during daylight hours do occur. Luna moths are most likely to be found in forested areas, commonly deciduous woodlands, but can be attracted to well-lighted areas in the evening.

Luna moths thrive in eastern North America, as far west as Texas, and a large portion of southeastern Canada. Luna moths that live and breed in Canada and the northern bordering states produce one generation (brood) per year (May-July). Farther south, through the Ohio River Valley, Luna moths produce two generations per year. In the deep south, it is not unusual for Luna moths to have three generations in a single year (March-September). Louisiana has experienced recorded sightings of Luna moths during each month of the year.

There are a few visible differences between male and female Luna moths. Males tend to be a lighter shade of green and are slightly smaller than females. Female Luna moths have slender fuzzy antennae. Male Luna moth antennae fan out much like a feather. 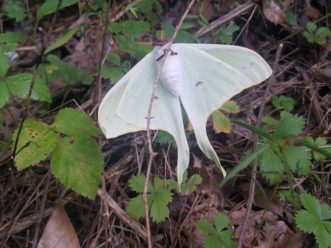 Adult Luna moths emerge from cocoons hidden in leaf litter on the forest floor. The newly emerged moth will climb to structure where it can hang to expand and dry its wings for flight.
LayLa Burgess, ©2019 HGIC, Clemson Extensio 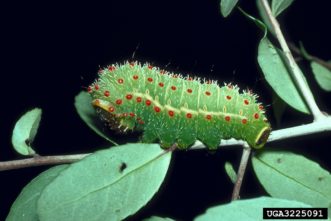 Luna moth caterpillars are lime green with a series of yellow lines and reddish-orange spots running down both sides. The caterpillars are herbivores that feed on the foliage of many types of trees. This includes alder, birch, beech, red maple, white oak, wild cherry, hazelnut, hickories, pecan, walnut, persimmon, sweetgum, willows, and smooth sumac. In northern regions, the caterpillars prefer white birch, whereas hickories, walnut, persimmon, and sweet gum are favorites in the south. The Luna moth caterpillar molts five times over 3-4 weeks before settling on a plant to spin a cocoon. The cocoon, containing the pupa, is usually spun in a tree over a 2-3-week period. The cocoon later falls to the ground among the leaf litter, where it is conveniently camouflaged and protected from the harsh conditions of winter. In appearance, the cocoon is thin and papery, comprised of silk and leaf pieces.

The adult Luna moth usually emerges from a cocoon in the morning and then climbs to a secure structure where it can expand its wings to dry throughout the day. As with many other silk moths, Luna moths do not feed as adults. The food (energy) for the adult stage is stored during the caterpillar stage. Since Luna moths do not feed as adults, they do not have a fully functional proboscis (the long slender mouthpart) like found on many other moths and butterflies. The proboscis on adult Luna moths has become functionless (vestigial). Luna moths live approximately one week after emerging from the cocoon. During this time, males can fly long distances to mate with females if necessary. Once females lay eggs, they die. 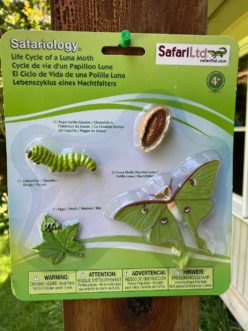 Owls, bats, bald-face hornets, parasitic wasps, and fiery searcher ground beetles are a few of the predators that eat Luna moths. However, the Luna moth has some great natural defense mechanisms. The wing pattern of a Luna moth allows the insect to easily camouflage itself when resting against tree bark or in fallen leaf litter. Eyespots are located on all four wings to confuse predators and assist in misguiding an attack to a less vulnerable location of the body. The Luna moth’s head is well hidden, usually causes a predator to attack one of the sweeping tails, resulting in the moth’s survival. Bats are particularly skilled at hunting Luna moths. The Luna moth uses its long hindwing tails to disrupt echolocation used by the bat during the hunt. 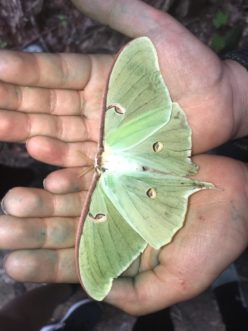 Luna moth caterpillars also have defense mechanisms against predators. The caterpillar deters a predator by rearing up the front portion of its body and making a clicking noise with its mandibles. Following the sounding of the alarm, the caterpillar will regurgitate a distasteful fluid as a warning.

Luna moths are not an endangered species, but fewer sightings are apparent in some areas. Trending issues that may contribute to the rarity of Luna moths include

When you are out at night (especially around well-lit areas), keep your eyes open and look out for this majestic wonder of nature. You might just get lucky and catch a glimpse.