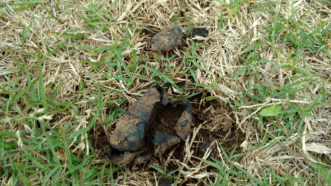 Mushrooms are the above-ground fruiting bodies of fungi that live in the soil. These fungi feed on decaying organic matter, such as old roots, stumps and thatch. When these fungi are present in your lawn, toadstools, mushrooms or puffballs of various shapes and sizes will seem to sprout up overnight after wet weather.

The growth of mushrooms in the lawn often appears as a circular shape. This is because fungi grow from a central point outward. Each year as the fungus grows, the circle expands. Most mushrooms do not damage the lawn, but fairy ring fungi can become a problem.

Lawns with fairy ring fungi will have areas of dark green or dying grass that are circular or arc-shaped. These circles can range in size from one foot to as large as several hundred feet in diameter. The grass in the area bordering it is often a dark green color and has mushrooms growing in it. The dark green grass is caused by nutrients that are released as the fungi grow and break down organic matter.

Fairy ring fungi are not plant parasites. They can damage a lawn by causing localized drought stress, since their fungal strands or mycelia make the soil repel water.

Prevention & Treatment: Mushrooms will disappear on their own when the weather becomes dry or turns colder. Although the mushroom fruiting bodies will no longer be evident in your yard, the fungal growth will slow and remain unseen until the environmental conditions are right again for growth.

Fairy ring fungi are difficult to control. You can be patient and allow the fairy rings to disappear over time. Watering to saturate the soil for several hours and over several days may help. Aerate the lawn to allow more water and fertilizer to reach the roots. Finally, you can replace the infested soil occupied by the fairy ring with clean soil.

Fungicides containing flutolanil (Prostar), pyraclostrobin (Insignia), or azoxystrobin (Heritage, Headway, or Scott’s Disease Ex) will help suppress fairy ring fungi. Due to product cost and for accurate application, homeowners may want to hire a licensed landscaper to apply products containing these fungicides. Apply all chemicals according to directions on the label.

Pesticides are updated annually. Last updates were done on 12/19 by Joey Williamson.