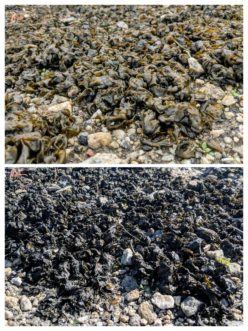 The top photo of Nostoc taken on an overcast day is showing approximately half of the potential size of the colony. The lower picture, taken on a sunny day, shows the same Nostoc colony in a black crust state.
N. Jordan Franklin, ©2018, Clemson Extension

Nostoc is a dark blue-green, jelly-like organism sometimes found in soggy home lawns. While the organism’s discovery can be alarming for homeowners, it causes no harm to plants or animals. The Nostoc is likely filling in space where the grass does not grow. The organism’s unusual appearance earns the nicknames star jelly, star shot, or star slime, as it was once believed that these alien-looking masses came from the dust of shooting stars. For more obvious reasons, Nostoc is also called witch’s butter or witch’s jelly.

Nostoc is not an alien lifeform, nor is it a plant, alga, or bacterium. Instead, Nostoc is a cyanobacterium. Cyanobacteria are like bacteria in that they are microscopic, single-celled organisms that contain no cell nucleus. Nostoc cyanobacteria form single-celled threadlike structures called filaments. These filaments often form colonies, which are held together by a jelly-like covering and are large enough to be seen by the naked eye.

Fossil records show Nostoc to be among the world’s oldest organisms, having lived on the earth for over 3.5 billion years. There are over 200 species of Nostoc colonizing a variety of environments, including some of the earth’s most inhospitable places. There are both saltwater and freshwater species, as well as terrestrial species. Nostoc produces a protective coating that allows it to live under extreme conditions of drought and flooding, as well as high and low temperatures. Some species of Nostoc are capable of withstanding freezing and thawing cycles, which allows them to live in both the Arctic and Antarctic.

Just as Nostoc performs photosynthesis, it also carries out another unique activity often associated with leguminous plants. Nostoc takes nitrogen gas from the atmosphere and ‘fixes’ it into a form that plants and animals can use. This process is known as nitrogen fixation. All organisms use nitrogen to make amino acids, proteins, and other building blocks necessary for life. While the earth’s atmosphere is made up of approximately 80% nitrogen gas, the gas form (N2) is not useful to most living organisms. First, nitrogen must be changed into an ammonia form (NH3) to be utilized. Whereas legumes partner with rhizobia bacteria in the soil to fix nitrogen, Nostoc colonies produce specialized nitrogen-fixing cells called heterocysts. Heterocysts are larger cyanobacteria cells that do not photosynthesize. Instead, they fix nitrogen from the air into a form that is supplied to the other cyanobacteria cells. Meanwhile, the cyanobacteria cells that photosynthesize provide the heterocysts with carbohydrates for food.

Overall, Nostoc contributes a much smaller amount of nitrogen to the surrounding environment at only 5 pounds of nitrogen per year as compared to the twenty-five to several hundred pounds added by legumes. Though this small amount of nitrogen does not amount to much for most cultivated crops, this is plenty of nitrogen for a natural ecosystem. Interestingly, rice is one crop that may benefit from nitrogen fixation by Nostoc. Due to its ability to live in extremely moist habitats, Nostoc is often abundant in the paddy production of rice.

Finding Nostoc in the home landscape is often alarming to the homeowner. However, the cyanobacteria have likely been there all along as a black, shriveled crust just waiting for enough moisture to resume their jelly-like consistency. Nostoc does not harm lawn or landscape plants. Instead, the organism is merely filling in space where grass or other plants will not grow, such as areas with compacted soil, excessive moisture, and high soil phosphorus levels. It may also form on wet concrete or gravel sidewalks, causing a slipping hazard if not managed. The top photo of Nostoc taken on an overcast day is showing approximately half of the potential size of the colony. The lower picture, taken on a sunny day, shows the same Nostoc colony in a black crust state.
N. Jordan Franklin, ©2018, Clemson Extension

To control small patches, skim Nostoc from walkways or the soil surface with a flat-edged shovel. However, more drastic action is often needed to manage larger areas. Aerate or deeply till turf areas to relieve soil compaction. Also, add organic matter to help improve soil structure and drainage. To reduce excessively wet areas, eliminate low spots where water collects, fix drainage problems, and reduce the amount of irrigation applied. Most lawn grasses and plants grown in South Carolina only need around 1 inch of water per week for healthy growth. Soil test to determine phosphorus levels in the soil. Reducing high levels of phosphorus is challenging; however, avoid the addition of more phosphorus to eliminate the excessive quantities that Nostoc prefers slowly. There are very few adequate chemical controls for Nostoc, but products that contain potassium salts of fatty acids, sold as ‘moss & algae killers’, can provide temporary management. However, until cultural conditions are improved, Nostoc will return.

Examples of products containing potassium salts of fatty acids to aid in Nostoc control are:

RTU = Ready To Use (a pre-mixed spray bottle)