Japanese pachysandra (Pachysandra terminalis) is an extremely popular evergreen groundcover. Native to Japan and China, Japanese pachysandra enjoys widespread use primarily in the cooler regions of its range (USDA Cold Hardiness zones 5a to 8b). Another member of this genus, Allegheny spurge (Pachysandra procumbens), is a lesser-known semi-evergreen species. It is native to fertile, well-drained, moist wooded areas in Indiana, Kentucky, Tennessee, North Carolina, south to Florida, and west to Louisiana (USDA Cold Hardiness zones 5b to 9a). 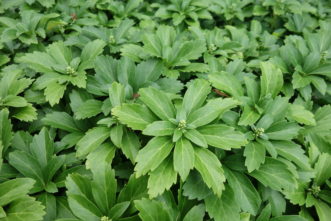 The lustrous green leaves of Japanese pachysandra (Pachysandra terminalis) are 2 to 4 inches long and 1- to 1½ inches wide and clustered in whorls at the tips of its stems.
R. F. Polomski, ©2021, Clemson University 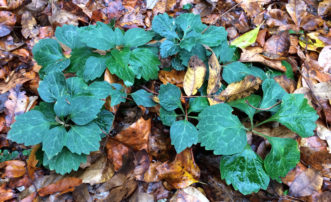 The mottled leaves of Allegheny spurge (Pachysandra procumbens) are 2- to 4-inches long, 2- to 3 inches wide, and coarsely toothed at the tips. Although less popular than Japanese pachysandra, Allegheny spurge demands wider availability for its attractiveness and support of pollinators.
R. F. Polomski, ©2021, Clemson University Japanese pachysandra (Pachysandra terminalis) produces flower stalks at the ends of its stems which are comprised of male flowers above and female below.
R. F. Polomski, ©2021, Clemson University 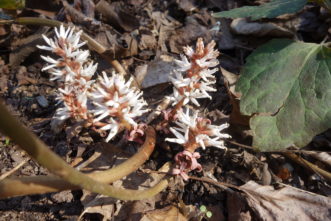 Allegheny spurge produces one to five fragrant, two- to four-inch long bottlebrush spikes of male and female flowers that emerge close to the crown from the base of a petiole. The prominent male flowers have brown anthers perched on thick, white filaments. R. F. Polomski, ©2021, Clemson University

Allegheny spurge has a similar bloom period, but it produces one to five pinkish-colored bottlebrush spikes of fragrant flowers that arise from a petiole or leaf stalk near the base of its prostrate-growing stems. When the flower stalks are not hidden by foliage, they produce a striking two- to four-inch long bottlebrush spike of white to pinkish-white flowers. The male flowers are at the top and the female flowers, if any, are at the base of the stalk. As the flowers fade, old, mature leaves also decline and wither. New, medium-green to grayish-green leaves emerge and during the season, develop attractive light-green or gray-green blotches. In the fall and winter, the leaves turn bronze-brown, but some may develop shades of light red or purple.

Both species thrive in partial shade to full shade and prefer well-drained, fertile soils. Japanese pachysandra is well-suited for planting in shrub and tree borders to fill in gaps and connect individual beds with its uniform appearance. Small, shaded landscapes that cannot support turfgrasses can be planted with Japanese pachysandra. Because a well-managed bed of Japanese pachysandra creates a spreading, smothering blanket of foliage, it does not partner well with other desirable plants.

Allegheny spurge is a perfect fit for naturalized, woodland gardens where it can be planted en masse. Although the mature leaves will eventually slough-off, they can be removed to improve the stand’s appearance. The less aggressive nature and open growth habit of Allegheny spurge makes it a suitable companion with other shade-loving groundcovers and low-growing plants. (See HGIC 1716, Plants for Shade for more information.) 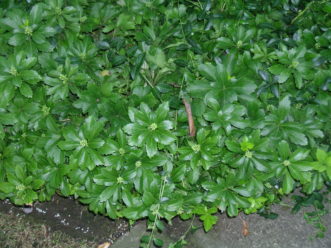 Japanese pachysandra is more prone to infection by Volutella stem and leaf blight (Volutella pachysandricola) than Allegheny spurge. This fungal disease produces tan or brown blotches on the leaves and stem cankers, water-soaked areas on the stems that turn brown, shrivel, and die. Volutella stem and leaf blight outbreaks are often due to stresses that include planting in full sun, infestations of scale insects, and winter injury. To reduce its susceptibility to this disease, plant Japanese pachysandra in the right location with suitable growing conditions and remove and discard any damaged or diseased plants.

A less common disease, boxwood blight (Calonectria pseudonaviculata), attacks susceptible boxwoods, but also attacks both Japanese pachysandra and Allegheny spurge, which are in the boxwood family (Buxaceae). Infections produce brown to black spots on leaves and stems, which are eventually killed. When this disease is observed and diagnosed, promptly remove and discard infected plants to reduce its spread.