Palm trees grown in the landscape appear carefree, but they are susceptible to many diseases, insects, and nutritional problems. Avoid many of these problems by following the recommended cultural practices that help keep plants healthy and vigorous. More information on how to grow outdoor palms successfully is provided in HGIC 1019, Palms & Cycads.

Leaf Spots: Palms are commonly affected by many leaf-spotting fungi. Leaf spots can be circular to elongated, brown, and possibly oily in appearance. It is difficult to differentiate among the leaf-spotting fungi by visual symptoms alone.

Prevention & Treatment: Don’t allow irrigation to wet palm foliage. In most cases, leaf spots will not kill the tree, and fungicides are usually not necessary. If the damage becomes severe, fungicidal sprays containing copper can be used (see Table 1 for specific products). If palm fruits are used for food purposes, copper fungicides are the only approved fungicides. Apply all fungicides at rates and spray intervals according to directions on the label. 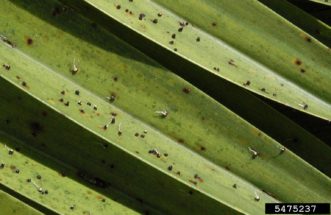 Infected leaves have small, black, wart-like structures erupting through both leaf surfaces. Tiny filaments may emerge from the black spots. There are usually no symptoms on the youngest leaves.

Prevention & Treatment: Properly space palms so that there is plenty of air circulation to reduce humidity. Avoid wetting fronds during irrigation. Removal and destruction of severely infected palm fronds will help minimize disease spread. However, removing too many fronds may be more damaging to the palm than the disease. Palms are sensitive to nutritional deficiencies, and frond removal can worsen existing problems and weaken the tree.

Fungicides are usually not necessary but can be applied as a preventative treatment during the spring. Select a fungicide containing copper (see Table 1 for specific products). If palms are used for food purposes, copper fungicides are the only approved fungicides. Apply all fungicides at rates and spray intervals according to directions on the label.

Ganoderma Root & Butt Rot: This disease is caused by the fungus Ganoderma zonatum, which can infect many types of palms. The first symptom of infection is withering and drooping of older fronds. Fronds collapse and droop parallel to the trunk. New growth is stunted and is pale green or yellow. The head of the infected palm may fall off or the trunk collapse. Depending on the point of invasion, the roots may be severely decayed.

Outer trunk tissues may seem solid, but affected palms have a hollow sound when tapped. Areas of dark brown tissue are evident when the trunk is dissected. Over time, conks (spore-producing structures of this fungus) may form. Palm death can take three to four years, depending on the tree’s age and environmental conditions.

Prevention & Treatment: This fungus survives on plant tissue, so remove and destroy any root systems, stumps, and trunks of dead palms in the landscape. Avoid any injury to the tree, especially during planting, staking, and regular maintenance activities by string trimmers and lawnmowers. Ganoderma survives in the soil, so it is not recommended to plant another palm in the same location. There is no chemical control for this disease.

Regardless of the pathogen, disease symptoms are similar. Buds and young fronds show black lesions and young leaves wilt. A firm rot of the bud occurs. Over time, this area may become slimy later due to secondary invaders. Older fronds may remain green for several months and are the last to die. Eventually, only the trunk remains.

Preventative fungicides containing copper can be used on plants exposed to the disease (see Table 1 for specific products). Apply at intervals sufficient to protect new developing tissue. Apply all fungicides at rates and spray intervals according to directions on the label.

Palms frequently suffer from improper mineral nutrition in the landscape. The most common nutritional deficiencies of palms are nitrogen (N), potassium (K), magnesium (Mg), and manganese (Mn). Other essential nutrients such as boron (B), calcium (Ca), copper (Cu), and zinc (Zn) are occasionally found to be deficient if they are not present in the fertilizers applied, but these deficiencies are not very common in the landscape.

Nutrient deficiencies can be caused by insufficient nutrients in the soil, a nutrient imbalance, poor soil aeration, a high soil pH, and an excessive planting depth.

Potassium (K) Deficiency: Potassium deficiency is perhaps the most widespread and serious of all disorders of palms in coastal South Carolina. Symptoms vary among palm species but occur first on the oldest leaves and affect progressively newer leaves as the deficiency becomes more severe. Typical symptoms are translucent yellow to orange spots that may be accompanied by black or necrotic spotting. Leaflets will usually have areas of necrosis (dead tissue) along their margins and tips. Symptoms are worse at leaf tips and margins and less severe at the base of the leaves. As symptoms progress, tips of leaves will appear withered, burnt, and frizzled. The midrib typically stays greenish-yellow for a period of time. Potassium deficiency can eventually be fatal to the palm.

Potassium tends to leach rapidly from sandy soils, and it is in these soils that potassium deficiency is more apt to occur. In heavier clay soils, the rate of potassium leaching is reduced. Deficiencies in clay soils may be more due to insufficient potassium fertilizer applied. Palms in lawns may become potassium deficient as many turfgrass fertilizers are high in nitrogen but low in potassium. Palms need fertilizers that contain potassium as high as or higher than the nitrogen content. Fertilize all palms separately from the lawn.

Prevention & Treatment: Potassium deficiency can be prevented and/or treated with applications of sulfur-coated (slow-release) potassium sulfate, but slow-release magnesium should also be applied simultaneously to prevent a potassium to magnesium imbalance. If treated, necrotic leaves will not recover, but new growth should become healthy and eventually replace the injured leaves.

Manganese (Mn) Deficiency: Manganese deficiency can be fatal to palms. This is a common problem in high pH soils (above pH 6.5) because manganese is insoluble at high pH levels. Additional causes can be high water tables or poor drainage, and excessive amounts of soil phosphorus, as it will tie up certain micronutrients, particularly manganese.

Early symptoms of manganese deficiency are interveinal chlorosis (yellowing between the veins) accompanied by interveinal necrotic streaking on the newest leaves. If the deficiency is advanced, leaves emerge completely frizzled, withered, scorched, and reduced in size. Manganese tends to leach more rapidly from sandy soils.

Prevention & Treatment: Have a soil test performed to determine the soil pH and, if necessary, adjust downward to increase the availability of manganese. For more information, see HGIC 1650, Changing the pH of Your Soil. Manganese sulfate applications to the soil or foliage can be used to avoid the problem. Apply 1 teaspoon manganese sulfate per gallon of water to the soil around the palm two or three times per year. Tecmangam and Southern Ag Manganese Sulfate are two brands of manganese sulfate.

Iron (Fe) Deficiency: Iron deficiency is primarily a cosmetic problem. Palms usually survive but will exhibit interveinal or general chlorosis on the newest leaves. Interveinal chlorosis is basically green veins surrounded by yellow tissue, and this is usually seen on the newest leaves first. As the iron deficiency becomes more severe, new leaves will show extensive tip necrosis, and there will be a reduction in leaf size. Iron deficiency in palms is usually induced in palms growing on poorly aerated soils (compacted or over-watered) or in palms planted too deeply. Iron deficiency may occur in palms with a damaged or inadequate root system which leaves the plant unable to take up sufficient nutrients from the soil. This deficiency is much less often caused by a lack of iron in the soil or by high pH soils.

Prevention & Treatment: In alkaline soils, iron-deficient palms can be treated with chelated iron fertilizers. In some cases, iron deficiency symptoms can be temporarily alleviated by regular foliar applications of chelated iron or iron sulfate, but long-term corrections will only occur when the poor soil aeration or proper planting depth is corrected. The rate of iron sulfate to use for foliar application is ½ teaspoon per gallon of water. Spray the foliage to runoff. 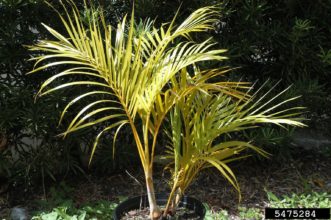 Nitrogen (N) Deficiency: Nitrogen deficiency is not a major problem in landscape palms unless soils are nitrogen-poor. Most palms generally require low levels of N, especially in comparison to turfgrass. Symptoms of nitrogen deficiency are uniform light green color foliage and a decrease in growth.

Prevention & Treatment: Treatment with any fertilizer containing N will quickly improve leaf color. The fertilizer nitrogen should be in a slow-release form. Prevention & Treatment: Coated or uncoated “prilled” (pelletized) kieserite can be applied to prevent or correct magnesium deficiency but may be difficult to find. Epsom salts (magnesium sulfate) or Southern Ag Magnesium Sulfate is very water-soluble and tends to leach from sandy soils very quickly. However, the use of 2 to 4 pounds of magnesium sulfate per tree along with controlled-release potassium four times per year should prevent further symptoms from occurring. If the soil pH is low, adjust using dolomitic limestone based on soil test results. Avoid the use of magnesium oxide as a treatment if the soil has a neutral or alkaline pH, as it is quite insoluble in soils with a high pH.

Boron (B) Deficiency: Boron deficiency in palms can cause leaves to appear small and crumpled. Other symptoms are sharp bends in the trunk with horizontal growth and bud necrosis or death.

Prevention & Treatment: Boron can also be toxic in even small amounts, so generally, fertilizers for palms should contain only very small amounts of boron. Sodium borates, boric acid, borax, or Solubar can be applied at 2 to 4 ounces per tree.

Palm nutritional deficiencies are easily prevented by following a yearly fertilization program. Mature palms in the landscape should be fertilized with a complete granular fertilizer formulated for palms, often called a “palm special.”

The latest research at the University of Florida recommends a fertilizer analysis of 8-2-12-4 (N-P-K-Mg) applied at the rate of 1.5 pounds per 100 square feet over the area beneath the palm canopy. This fertilizer should be a slow-release form and should contain the trace nutrients listed above. Roots of larger palm trees may extend 30 to 50 feet from the trunk, and the entire area needs to be fertilized. If centipedegrass grows within 30 feet of the palm, the fertilizer rate over the lawn area should not exceed 1 pound per 100 square feet, with a maximum of three applications per season.

Adjustments for rates and distances will have to be made for newly planted palms. Newly planted palms should not be fertilized until after they put out a new spear. Be sure to fertilize only during the growing season.

In the absence of an available palm fertilizer, use the same rate of a 12-4-8 slow-release fertilizer every two months during the growing season. Apply Epsom salts at 2 to 4 pounds per tree during the in-between months of regular fertilization. Apply a product containing the micronutrients needed by palms, such as Southern Ag Essential Minor Nutrients, during the same months as the Epsom salts applications.

Supplemental magnesium and complete micronutrient amendments in the fertilizer are important. Once symptoms of a deficiency are evident, it can take six months or more for a palm to recover.

Pesticides are updated annually. Last updates were done on 09/21 by Joey Williamson.