Roses are one of the most popular and versatile flowering shrubs grown throughout South Carolina. Most roses require a lot of care to grow and bloom properly. One of the most common causes of failure with roses is poor disease control. The three most serious diseases of roses in South Carolina are black spot, powdery mildew, and stem canker, and dieback. For more information on rose culture, see HGIC 1172, Growing Roses.

Remember that different types of roses vary greatly in their resistance to diseases and the maintenance they require. To grow roses successfully, you must select varieties that require an amount of care equal to that which you are able to provide. Shrub type roses bloom beautifully with few chemical controls needed, while the more susceptible varieties such as hybrid tea roses require an effective spray program to be in place before the growing season begins. Black spot is a common and serious rose disease often reaching epidemic proportions in a season. The fungus Diplocarpon rosae causes black spot disease. It is most severe after long wet, warm periods in the spring. Symptoms occur on rose leaves as circular, black spots, which grow to ½-inch in diameter, and become surrounded by a yellow area. Infected leaves often drop from the plant. Infection continues throughout the summer months. The immature wood of first-year canes develops raised purple-red irregular blotches. Plants become stunted and produce fewer, paler flowers. By mid-summer severely infected plants may have lost all of their leaves.

Prevention & Treatment: The spread of black spot can be reduced and future infections minimized by following these cultural practices:

Use fungicide sprays to control black spot effectively, even on resistant varieties. A rigorous fungicide program must be followed during conditions that favor disease development for susceptible cultivars. Select one of the following fungicide sprays if the disease is severe enough to warrant control: chlorothalonil, mancozeb, myclobutanil, propiconazole, or copper fungicides. See Table 1 for examples of products. Apply all chemicals according to directions on the label. 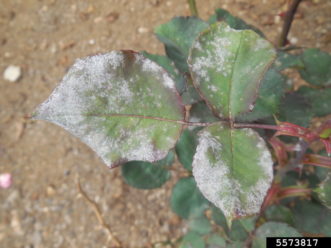 Powdery mildew is another widespread and serious disease problem of roses. The fungus, Sphaerotheca pannosa var. rosae, causes powdery mildew on roses and produces a grayish-white powdery substance on the surfaces of young leaves, shoots, and buds. Infected leaves may be distorted, and some leaf drop may occur. In addition, flower buds may fail to open, and those that do may produce poor-quality flowers. It can occur almost anytime during the growing season when temperatures are mild (70 to 80 °F), and the relative humidity is high at night and low during the day. It is most severe in shady areas and during cooler periods

Prevention & Treatment: Rose varieties differ in their susceptibility to powdery mildew, thus resistant varieties are the best defense against this disease. A film of water inhibits infection, so in years when rainfall is high during spring and summer, control measures may not be needed until the drier months of late summer. Remove and destroy diseased leaves and canes during the growing season. Rake up and destroy leaves under the plant in the fall.

If the disease is severe enough to warrant chemical control, select a fungicide that controls both black spot and powdery mildew. Fungicide sprays recommended for use in the home garden include: propiconazole, thiophanate-methyl, myclobutanil, sulfur, neem oil (clarified hydrophobic extract), or baking soda mixed with horticultural oil. See Table 1 for examples of products. Apply all chemicals according to directions on the label.

The following roses have some disease resistance;

Cankers usually appear as dead or discolored areas on rose canes and vary in color from light tan to dark purplish-brown. They are caused by various species of fungi, including Botryosphaeria, Leptosphaeria, Coniothyrium, and Cryptosporella. These fungi enter healthy canes through wounds caused by winter injury, improper pruning, wind, hail damage, or flower cutting. Cankers can enlarge until they surround the cane and/or reach the base (crown) of the plant spreading to other canes or killing the plant. They commonly occur on roses that have been weakened by black spot, poor nutrition, or winter injury. 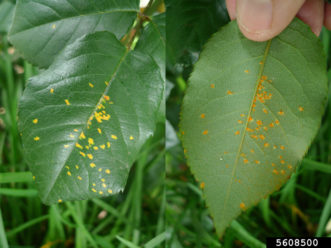 Rose rust is a disease caused by the fungi in the genus Phragmidium. It causes orange-colored spots to appear on stems and leaves. When rust is severe, an orange dust-like substance may be present on the plant surface and on the ground below the plant. Rose rust attacks all plant parts except the roots and petals. Severely diseased leaves of highly susceptible cultivars may turn yellow or brown and drop.

Prevention & Treatment: Provide good air circulation. Do not plant roses in crowded areas and prune plants to keep the centers open. Water plants before noon and avoid getting the leaves wet. Remove and destroy diseased leaves and plants. Apply a fresh layer of mulch around the rose plants. Fungicides containing chlorothalonil, mancozeb, or sulfur are protectant fungicides to prevent rust disease on plants, but fungicides containing myclobutanil or propiconazole are foliar systemic (that is, the active ingredients move into the leaves) and may give better control of existing disease. See Table 1 for examples of products. Apply all chemicals according to directions on the label. 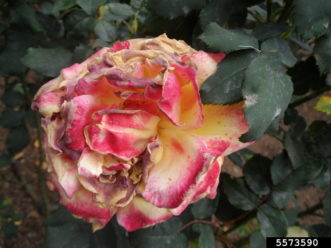 Rose flowers and buds are often infected with the gray-brown fuzzy growth of the gray mold fungus Botrytis cinerea. The fungus is most active when temperatures are 62 to 72 °F and conditions are moist. Infected canes have discolored sunken areas (cankers) and dieback that can extend down the stem from the flowers. Diseased flower petals have small, light-colored spots surrounded by reddish halos, which can quickly expand into large, irregular blotches. Buds fail to open and often droop. Thrips can cause similar damage to half-open buds, so inspect plants carefully. For more information about thrips damage, please see HGIC 2107, Rose Insects & Related Pests.

Prevention & Treatment: Keeping the area clean is more important than anything else. Prune off and dispose of all fading flower blossoms and leaves in the trash. Provide good air circulation, and avoid wetting the leaves when watering. Disease easily develops on canes that have been damaged, on canes that are kept too wet by the use of manure mulch, or on wet leaves. If chemical control is necessary, fungicides containing thiophanate methyl, chlorothalonil, or neem oil (clarified hydrophobic extract) are available for homeowner use. Use neem oil on a trial basis, especially on open blooms and during hot weather. Neem oil is a rather weak fungicide. On dormant bushes, copper fungicides can be used. See Table 1 for examples of products. Apply all chemicals according to directions on the label. 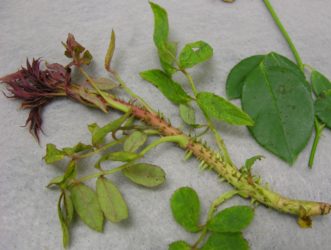 Rose rosette disease is an untreatable rose disease caused by the Rose rosette virus (RRV) and is spread and introduced into the rose during feeding by the rose leaf curl mite (Phyllocoptes fructiplilus). This extremely small eriophyid mite feeds on cell sap of the tender stems and leaf petioles. The rose leaf curl mite alone causes little damage while feeding, but if it is a carrier of RRV, symptoms begin to appear in the rose, typically within one to three months.

Roses exhibit reddened terminal growth on infected branches, and the stems become thicker and more succulent than those on unaffected parts of the plant. These stems exhibit an abnormally high number of pliable thorns, which may be either green or red. Rose leaves that develop on infected branches are smaller than normal and may be deformed similarly to herbicide injury by 2,4-D. Lateral branches may grow excessively from main stems and create a witch’s broom symptom like glyphosate (Roundup™) injury on roses. Flowering is reduced, and the petals may be distorted and fewer in number.

These symptoms generally become evident in the late spring to early summer and progress during the growing season. Once the rose becomes infected, RRV moves throughout the plant, and the entire plant is infectious. By the time symptoms are evident in a rose, it already may have spread to adjacent plants by the movement of the eriophyid mites. Infected plants typically die within a couple of years.

Prevention & Treatment: The wild multiflora rose is very susceptible to the rose rosette disease, so any nearby wild plants should be removed and promptly disposed of. Any infected, cultivated roses should be immediately removed, then burned, or bagged for trash pickup. Also, remove any roots, which might re-sprout later. Do not leave an uprooted infected plant in the garden, as the mites may leave this rose for other nearby plants. Always space rose plants so they do not touch.

Because RRV is systemic within the infected rose plants, grafting asymptomatic stems onto other rose plants will transmit the virus. Pruners used on diseased plants must be disinfected with rubbing alcohol or a dilute bleach solution before being used on uninfected plants, as sap on the pruners is contaminated with the virus.

To reduce the spread of the eriophyid mites from the site of an infected rose, nearby roses can be treated with a bifenthrin spray every two weeks between April and September. This may prevent additional plants from becoming diseased. See Table 1 for examples of brands and products containing bifenthrin. Always check product labels for the correct active ingredient. Follow label directions for use. 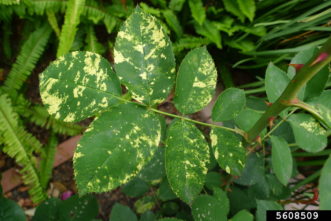 The symptoms associated with Rose mosaic virus (RMV) are highly variable. Yellow wavy line patterns, ring spots, and mottles in leaves will occur on some varieties of roses sometime during the growing season. In general, symptoms are most evident in the spring. Yellow net and mosaic symptoms on the leaves are also associated with RMV and detract from the overall quality of the plant. Infected plants become weakened and are more sensitive to damage caused by other stresses, such as drought or low temperatures. 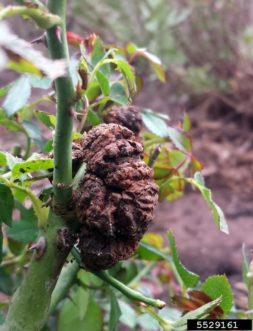 This large, woody crown gall (caused by the soil-inhabiting bacterium, Agrobacterium tumefacens) formed at a pruning site. The pruners likely picked up the bacteria from another cut, and they were transferred to this cut stem.
Jennifer Olson, Oklahoma State University, Bugwood.org

This disease is caused by a soil-inhabiting bacterium, Agrobacterium tumefaciens, which infects many ornamentals in the home garden. The symptoms are rounded galls, or swellings, that usually occur at or just below the soil surface on stems or roots. However, galls may appear at pruning sites. The galls are light green or nearly white when young. As they age, the galls darken and become woody, ranging in size from small swellings to areas several inches across. The galls disrupt the flow of water and nutrients traveling up from the roots and stems, thus weakening and stunting the top of the plant.

Prevention & Treatment: To prevent crown gall, select disease-free roses. Once a plant is infected, nothing can be done since no chemical controls are available for crown gall. Avoid injury to the roots and crown of the plant during planting and cultivating because the bacteria enter through fresh wounds. Remove infected plants as soon as galls are observed. If possible, remove and discard the soil from the area where the infected plant was located. Disinfect all cutting and pruning tools that have been used near crown gall. To disinfect tools, dip them for several minutes in a solution of 0.5 percent sodium hypochlorite (household bleach).

Pesticides are updated annually. Last updates were done on 7/21 by Joey Williamson.