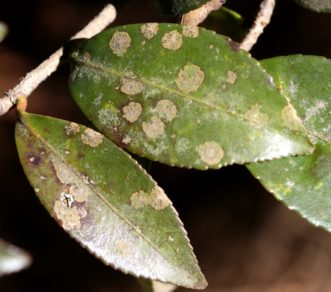 Of the various kinds of organisms that cause plant disease, plant parasitic algae are not the norm. The only species that is common in the United States is Cephaleuros virescens. It causes a disease called algal leaf spot (also descriptively known as green scurf). This pathogen has a wide host range of over 200 plant species (more than 60 families) and ranges south from North Carolina into Florida and west into Texas. Plants most commonly affected by this pathogen tend to have somewhat leathery leaves, such as those found in camellia, magnolia, holly, Indian hawthorn, and many others. 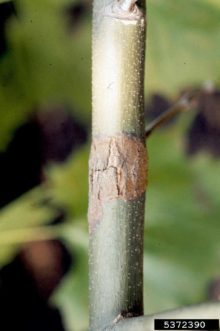 Algal leaf spot is most visible when it affects leaves, but it also regularly affects twigs and branches and sometimes fruit. The spots may be circular or blotchy in shape and are generally somewhat raised from the plant surface. The edges of the spots may be wavy or feathered. They vary in color from a crusty gray-green to greenish-brown. However, in summer, when the alga is reproducing, the spots take on a velvety, red-brown appearance due to the production of reddish, spore-producing structures. If colonies are numerous, premature yellowing and loss of leaves can occur.

In some cases, the alga colony is superficial. When that occurs, the plant tissue beneath the spot slowly dies and turns brown. Eventually, a superficial colony will wash off in the rain or simply flake off. To survive long term, colonies must breach the plant surface, typically through a small wound.

Damage to the plant is greatest when twigs and branches are affected. The alga enters through a small crack or crevice in the bark. The bark in that area thickens and cracks as a canker forms that eventually can girdle the branch, killing it. Older algal colonies may become colonized (or lichenized) by a fungus and are then classified in the genus Strigula. This is the only lichen that is parasitic on plants. These leaf spot lichens are composite organisms that include an alga and a fungus. For more information on these fascinating organisms, see HGIC 2354, Spanish Moss, Lichens & Slime Molds, and the HGIC video, Lichens.

This disease is favored by wet weather and plants that are already weakened by poor growing conditions. Sporangia (asexually-formed reproductive structures) develop during the summer. The sporangia are dispersed by rain, overhead irrigation, and wind. These structures form new algal colonies that will produce new sporangia the following year.

Algal leaf spot is not usually a serious problem. When the disease is mild, remove and destroy leaves with spots as well as diseased branches. Also, rake up and destroy affected leaves that have fallen to the ground. Since algal leaf spot is most often a problem for plants that are under stress, an important step in management is to improve growing conditions. Make sure that plants are receiving the recommended amounts of sunlight, water, and fertilizer. If needed, improve air circulation around affected plants by removing or thinning out nearby vegetation. Avoid overhead irrigation whenever possible.

When algal leaf spot is severe, copper fungicide sprays are recommended. Sprays may need to be applied every 2 weeks if wet conditions persist. However, when the affected plant is too tall to apply sprays safely, treatment may not be feasible for the homeowner and may require professional assistance. See Table 1 below for examples of copper fungicide products.

Pesticides are updated annually. Last updates were done on 7/21 by Joey Williamson.