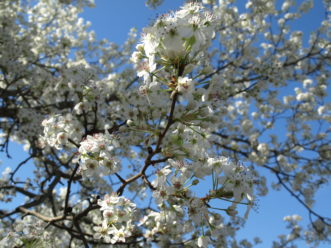 Bradford pear (Pyrus calleryana ‘Bradford’) is a spring-flowering tree that has been widely planted throughout the eastern U.S. in the last few decades. It is a popular tree that is frequently seen in nearly every city within its growing range. The species is a native of China, Taiwan, Japan, and Vietnam; the cultivar ‘Bradford’ is the most commonly planted in South Carolina.

The Bradford pear grows 30 to 50 feet tall and 20 to 30 feet wide. It has a wider and more erect, branchier canopy than the species.

The most attractive feature of this thornless tree is the showy white flowers that appear before the leaves in the spring. Early spring flowering may last two weeks, but spring frosts may reduce bloom time. Occasionally the tree will flower in the fall, usually due to some stress factor, like drought. The flowers, unfortunately, have an unpleasant fragrance.

Small, round, brown fruit then appear but are hidden by the leaves. Fruits are about the size of a marble and are often eaten by birds. In the fall, the leaves turn mahogany-red and sometimes bright orange-red. Bradford pears are one of the first flowering trees in the spring, and one of the last trees to have colorful leaves in the fall. White blossoms of Bradford pear are about a half-inch in diameter.
D.R. Coyle, ©Clemson Department of Forestry and Environmental Conservation. 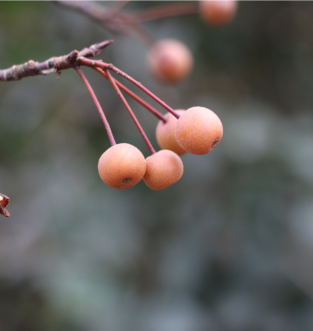 Bradford pear fruits are small, round, and hard until they soften after the first frost.
S.C. Tanner, ©Clemson Extension.

Bradford pear may be grown as a specimen, screen, or street tree. Bradford pear grows best in full sun but will tolerate part shade. It requires low-to-medium fertility. It tolerates most soil types and conditions, including occasional wet soils or drought. It is also tolerant of pollution. Unfortunately, because of its invasive tendencies, planting any P. calleryana cultivar is no longer recommended (see below).

The ‘Bradford’ cultivar of callery pear is relatively resistant, although not immune, to most pests and diseases, including fire blight. Fire blight is a common problem of many pear species where the ends of twigs and leaves (and fruit, in fruit-producing trees) become blackened as the disease progresses further down the branches. Affected leaves will remain attached, and a shepherd’s hook bend in the twig may be noticed. (For more information on fire blight of fruit trees, refer to HGIC 2208, Fire Blight of Fruit Trees).

Entomosporium leaf spot that damages the foliage of photinias (red tips) and Indian hawthorns is also a disease of callery pears, such as ‘Bradford’ and ‘Chanticleer’. Reddish-purple leaf spots enlarge to create a general reddening and blight of the foliage. If untreated, this may be followed by leaf-drop. For cultural and chemical control of Entomosporium leaf spot, please see HGIC 1081, Photinia (Red Tip).

The Bradford pear is relatively free of insect problems, though aphids sometimes colonize individual branches. It does, however, suffer from severe branch splitting, especially in older trees (15+ years). The narrow branching angles cause trees to split in half, especially when subjected to ice and storm conditions.

Sapsuckers will occasionally attack Bradford pears, but this damage rarely does any real harm to the tree. In almost all cases, the tree heals from these wounds. 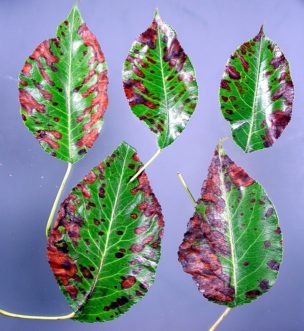 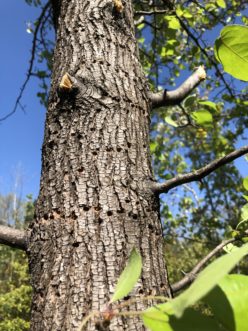 The damage caused by yellow-bellied sapsucker is horizontal rows of small holes. These birds return later to lap up leaking sap.
D.R. Coyle, ©Clemson Department of Forestry and Environmental Conservation.

Pyrus calleryana and cultivars are on the Invasive Plant Pest Species of South Carolina list. Although the ‘Bradford’ pear was originally bred as sterile and thornless, they readily cross-pollinate with other cultivars of callery pears and subsequently produce viable fruit. The ripened fruit is eaten and disseminated by birds, which results in very thorny thickets of wild pear trees. These escapees are generally unnoticed until spring when the edges of fields, abandoned lots, and forest edges are white with blooms. Callery pears also have thorns ranging from ¼-inch long to over 2-inches long and can cause extensive damage to equipment by land managers that are trying to remove them from their property. 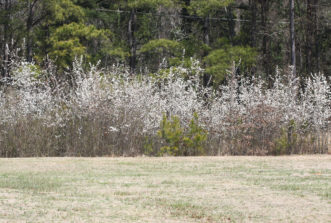 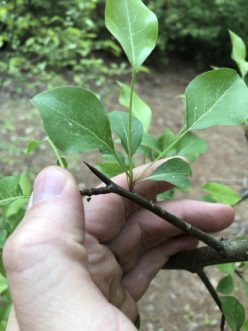 Thorns on a callery pear can be long and slender or short and stout.
D.R. Coyle, Clemson Department of Forestry and Environmental Conservation. 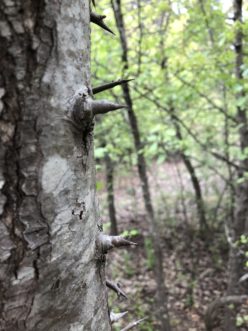 These, are from a wild callery pear population in central South Carolina. D.R. Coyle, Clemson Department of Forestry and Environmental Conservation.