Fire blight is one of the most devastating and difficult-to-control diseases of many fruit trees, including apple and pear, as well as of other rosaceous ornamental plants. This is a bacterial disease caused by Erwinia amylovora, which can spread rapidly, killing individual apple and pear trees when conditions are right for disease development and if susceptible rootstocks are used. The fire-scorched appearance of a young twig with fire blight. Note the characteristic blackened, attached leaves and the shepherd’s crook appearance of the twig.
Guido Schnabel, ©2015 Department of Agricultural & Environmental Sciences, Clemson University

The first symptoms of fire blight occur in early spring when temperatures are above 60 °F and the weather is rainy or humid. Infected flowers turn black and die. The disease moves down the branch, resulting in death of young twigs. These blacken and curl over, giving the appearance of a “shepherd’s crook.” Leaves on affected branches wilt, blacken, and remain attached to the plant, giving it a fire-scorched appearance. Slightly sunken areas, called cankers, appear on twigs, branches, and the main stem. The cankers initially have a water soaked appearance, but then become sunken and dark. Cracks may appear in the bark around the cankers. The bacteria survive in the cankers. Many parts of the plant can be affected, including blossoms, stems, leaves, and fruit. During wet spring weather, there may be a milky-like, sticky liquid oozing from the infected plant parts, and it contains the bacterial pathogen. Insects and splashing rain can then spread the disease. 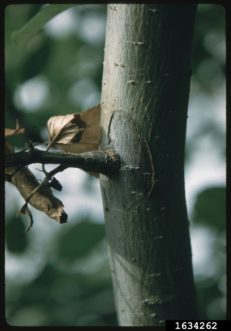 Fire blight has spread down the twig into the main stem, where a canker has begun to form.
Photo by Penn State Dept. of Plant Pathology & Environmental Microbiology Archives, Penn State Univ., Bugwood.org

In the home garden, fire blight can be very destructive to apple and pear trees. Pear trees are particularly susceptible. Some ornamental pear trees, such as ‘Bradford,’ were considered resistant to the disease, but they can become infected when conditions are favorable for disease development. Certain plants in the rose family (Rosaceae), including many ornamental plants, can be affected by fire blight. Some of these include crabapple, pyracantha, cotoneaster, hawthorn, photinia, quince, serviceberry, loquat, and spirea. The highly invasive callery pear, which is often seen along the margins of fields, is very susceptible to fire blight and can be a source of the disease (see HGIC 1006, Bradford Pear).

There is no cure for fire blight, making disease prevention extremely important. Controls for fire blight include selecting tolerant varieties, using recommended cultural practices and sanitation measures, and applying bactericides and insecticides. Although these methods are not 100 percent effective, they help reduce disease severity. Prune out blackened twigs and branches with cankers during the dormant season. Pruning during the growing season may spread the disease.

Recommended Varieties: Select fruit tree cultivars that are less susceptible to fire blight and are suitable for planting in South Carolina.

Apple varieties that are moderately resistant to fire blight include:

Ornamental pear varieties that are moderately resistant to fire blight include:

‘Bradford’ is the most resistant of these varieties.

Asian pears that have some resistance to fire blight include:

Crabapples with moderate resistance to fire blight include:

Cultural Practices & Sanitation Measures: Reduce the spread of fire blight by removing and destroying all infected plant parts. Pruning cuts of twigs and branches are made a minimum of 8 to 12 inches below any sign of infected tissue. Promptly destroy of all infected prunings by burning or burying. Disinfest all pruning tools between cuts using a 10% bleach solution (1 part household bleach to 9 parts water) or 70% alcohol. To reduce the spread of fire blight, pruning is best done during the dormant season. Avoid excess nitrogen fertilization, which results in excess succulent growth, because if injured, succulent new growth is easily infected. Remove all suckers coming up from the base of the trees, as these are more susceptible to fire blight infection, which can then move rapidly into the trunk.

Insecticides & Bactericides: Bacteria enter the plant through blossoms, fresh wounds, or natural openings. Both rainfall and insects (such as bees, ants, flies, aphids, and beetles) that are attracted to the bacterial ooze spread can spread fire blight. These insects inadvertently carry the bacteria from oozing cankers to other susceptible plant parts. Control of insects can reduce the spread of bacteria and the occurrence of infections. Honeybees can carry and spread the fire blight bacteria during pollination of flowers. However, to protect all pollinating insects, do not use insecticides during bloom. These fire blight cankers on the main stem are oozing a bacterial suspension that may likely be picked up and spread by insects.
Photo by Penn State Department of Plant Pathology & Environmental Microbiology Archives, Penn State University, Bugwood.org

Apples: If fire blight has been severe the previous year, then one spray of a copper fungicide is applied immediately prior to bloom. Be sure to make a thorough coverage of all branches and spurs. This will reduce the amount of bacterial inoculum present on the exterior of the tree and reduce disease spread and development. See Table 1 for copper fungicide products. (Copper fungicides are unique in that they can also control many bacterial pathogens.) Follow label directions for mixing and application.

The recommended bloom spray bactericide for susceptible apple trees is streptomycin. The first spray is applied at the beginning of bloom. Repeat this spray every 3 to 4 days, as long as flowers are present. Streptomycin is a preventative treatment only, as it stops the fire blight bacterium from entering the blooms and starting infections. The time between streptomycin application and fruit harvest must be a minimum of 50 days. See Table 1 for streptomycin products. Mix and apply all chemicals according to directions on the label.

Pears: Pear trees are also treated with a pre-bloom, copper fungicide spray, and then sprays of streptomycin during bloom. Apply the first spray with streptomycin as soon as the flowers open. Repeat at 3 to 4 day intervals as long as blossoms are present. The time between streptomycin application and fruit harvest must be a minimum of 50 days. See Table 1 for copper fungicides and streptomycin products. Mix and apply all chemicals according to directions on the label.

Crabapple: A copper fungicide may be applied before and after bloom to reduce bacterial inoculum on the exterior of twigs and spurs. If applied during bloom, it will cause russeting on the fruit and possibly fruit abortion. Therefore, only streptomycin is applied during bloom. Apply the first spray with streptomycin as soon as the flowers open. Repeat at 3 to 4 day intervals as long as blossoms are present. Do not use streptomycin once fruit are visible. Mix and apply all chemicals according to directions on the label.

NOTE: Adequate control of diseases and insects on large trees is usually not feasible, since complete coverage of the foliage with a pesticide cannot be achieved. For insect pest control on apples and crabapples, please see HGIC 2001, Apple & Crabapple Insects.

Pesticides are updated annually. Last updates were done on 10/19 by Joey Williamson.