Common lespedeza, also known as Japanese clover (Kummerowia striata, syn. Lespedeza striata), is a very common summer weed that can easily choke out thin turf. It is often found in open woods and fields and frequently in disturbed areas and turf.

Lespedeza is a mat-forming, wiry stemmed, prostrate, freely branched summer annual. It has dark green trifoliate (arranged in threes) leaves with three oblong, smooth leaflets. Leaflets have parallel veins nearly at right angles to a prominent mid-vein. Its leaves have smooth edges and a short spur at the tip of each leaflet. Lespedeza has a semi-woody taproot and grows close to the ground, making it difficult to cut with a mower. It flowers in late summer with pink to purple, single flowers found in leaf axils on most of the nodes of the main stems. 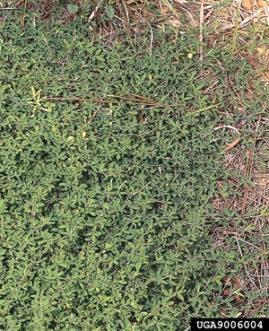 Common lespedeza grows well in thin turf and dry, compacted areas. To discourage lespedeza’s growth, it is recommended to increase the mowing height and to keep the soil’s pH at correct levels for the turfgrass species. Additionally, common lespedeza is associated with soils that have low levels of available nitrogen, making this a more common weed in centipedegrass lawns. For more information on growing healthy turfgrass, see HGIC 1201, Fertilizing Lawns; HGIC 1205, Mowing Lawns; and HGIC 1207, Watering Lawns.

Hand-pulling is an option, especially in landscape beds where herbicides pose a possible threat to desirable plants.

In Lawns: Cultural controls should first be implemented before applying herbicides for lespedeza control. However, if after taking steps to modify lawn care techniques, chemical control may still be necessary to reduce the lespedeza population further. Herbicides should be carefully chosen according to turf species, and all label instructions followed.

Note: Herbicides containing 2,4-D should be applied at a reduced rate on St. Augustinegrass and centipedegrass to prevent damage to these lawns. Read the product label for the number of fluid ounces of the 3-way herbicide to add per gallon of water in a pump-up sprayer. If a second application is needed, apply the herbicide in spot treatments about 30 days later. Do not spray lawns under drought stress or if temperatures are over 90 °F. Do not spray during the spring green-up of warm-season turfgrasses.

In addition to three-way herbicides, there are several other herbicides that can be used for lespedeza control in home lawns. Atrazine may be used to control lespedeza in centipedegrass and St. Augustinegrass only. Atrazine is a post-emergence broadleaf weed killer that also controls several common grassy weeds and has some pre-emergence activity. Do not apply atrazine to lawns during the spring green-up or if the turfgrass is under drought stress. Do not apply atrazine sprays if the temperatures will exceed 90 °F. Examples of products containing atrazine are:

Note: Read and follow all label instructions when using herbicides. Repeat herbicide spot applications may be required for acceptable control. Read the product label for the number of permitted applications per year and the time interval between sprays. Do not mow within 48 hours after application of most herbicides. Most post-emergence herbicides need to dry on the leaf surface before irrigation or rainfall occurs. See Table 1 for turfgrass tolerance to herbicides.

CAUTION: Most herbicides should not be applied during spring transition (green-up period of a warm-season turfgrass lawn) or when air temperatures exceed 90 ºF, as this can cause severe damage to the turfgrass. A newly seeded lawn should be mowed a minimum of three times before applying an herbicide. Rainfall or irrigation a day or two prior to herbicide application reduces the chance of turfgrass injury and enhances weed uptake of the herbicide.

A more recent herbicide combination of thiencarbazone, iodosulfuron, and dicamba, as found in Celsius WG Herbicide, is selective to control many broadleaf weeds and several grass weeds in all four of the common warm-season grasses. It cannot be used in fescue lawns but can be used to remove fescue from warm-season lawns. Apply when annual lespedeza is actively growing and again 2 to 4 weeks later. The addition of a non-ionic surfactant, such as Southern Ag Surfactant for Herbicides, Hi-Yield Spreader Sticker Non-Ionic Surfactant, or Bonide Turbo Spreader Sticker, will increase control. Celsius WG Herbicide is safe to apply during spring green-up of warm-season grasses. Follow label directions for mixing and use.

Metsulfuron, such as in Quali-Pro MSM Turf Herbicide, gives very good control of lespedeza in bermudagrass, centipedegrass, St Augustinegrass, and zoysiagrass lawns. Quali-Pro Fahrenheit Herbicide also contains dicamba along with metsulfuron. For these two professional use products, a non-ionic surfactant, such as Southern Ag Surfactant for Herbicides, Hi-Yield Spreader Sticker Non-Ionic Surfactant, or Bonide Turbo Spreader Sticker, is required at 2 teaspoons per gallon of spray mix for best control. A non-ionic surfactant will help the herbicide adhere to the leaves for increased penetration.

In Landscapes: If lespedeza is a problem in landscape beds, glyphosate can be used for spot treatments around ornamental plants. Examples of concentrated glyphosate (41% or more) products are:

Glyphosate is a non-selective herbicide that should be used with caution. Do not allow glyphosate spray mist to contact ornamental foliage or stems as severe injury will occur. A cardboard shield may be used to prevent glyphosate spray from drifting to nearby ornamentals. Since lespedeza may not be completely controlled with less strong glyphosate sprays, use a 5% spray solution of glyphosate. Follow label directions for mixing and use.

Pesticides are updated annually. Last updates were done on 01/23 by Adam Gore.