Pine trees (Pinus species) are important to South Carolina not only for their ornamental value but also for lumber, watershed management, wildlife habitat, and Christmas trees. There are over 125 pine species worldwide, nearly all of which are native to the northern hemisphere and of which 36 are native to the United States. Pines grow best in full sun on well-drained, acid soil.

Several pine diseases are common in South Carolina. Some of these can be very detrimental, even causing tree death, while others cause only minor aesthetic issues. Maintaining healthy pine trees by following recommended cultural practices (see HGIC 1020, Pine) is the first line of defense in preventing most of these diseases. If infected portions of a tree are removed, it is best to destroy that material, as fungal spores can still be spread from cut branches or stems.

Fusiform rust, caused by the fungus Cronartium quercuum f.sp. fusiforme, is one of the most economically important diseases affecting pines in the Southeast. This disease can affect pines whether they’re grown in a production forestry stand, natural woodland, or urban setting. Symptoms consist of purplish spots at the site of stem infection. Stems begin to swell four to six months after infection, resulting in spindle-shaped galls. Galls slowly enlarge each year, and dieback of small stems or cankers on larger stems often occur. Stem breakage can occur, which may lead to tree death. During the spring, blister-like, fruiting bodies break through the pine bark releasing yellow-orange spores, which are spread by wind and infect the leaves of oaks, the alternate host. Orange specks develop on the underside of the oak leaves, turning into small, dark, fingerlike projections. In early spring, spores are spread back to pines by the wind. Temperatures between 65 and 80° F, relative humidity above 98 percent, and wet needles and shoots favor dispersal of spores and infection of pines.

Prevention & Treatment: Removal of all infected plant material may aid in reducing the spread of the fungus. Pinus echinata (shortleaf pine) and Pinus palustris (longleaf pine) are mostly resistant to fusiform rust. Chemical control is usually neither necessary nor practical. This disease is caused by the fungus Cronartium quercuum. Hard pines – such as Scotch, Austrian, pitch, loblolly, and shortleaf – are generally more susceptible than soft pines, such as white pine. On southern pines, the disease is sometimes confused with fusiform rust. Infection results in the formation of spherical galls, which completely surround the stem. The galls disrupt the sap flow, often girdling and killing the part of the tree above or outside of it. Trees are greatly weakened and subject to wind damage and breakage. Young saplings may be killed. Red and black oaks are the most important alternate hosts. Infection on oak leaves causes small necrotic or chlorotic areas. On the underside of the leaves, yellow to orange spores may be visible. All spores, which infect both pine and oak, are primarily windborne. High humidity during spore dissemination increases the incidence of infection.

Prevention & Treatment: Pruning out galled branches and trees may be effective. Chemical control is usually neither necessary nor practical. Needle rusts in North America are caused by more than 20 species of the fungus Coleosporium. Symptoms consist of yellow spots on the needles, which appear during the spring. They are followed by whitish blisters and orange spores. Infection may be severe enough to cause defoliation. This fungus requires an alternate host (another plant species) to complete its life cycle. The fungus infects aster or goldenrod during summer and can overwinter in these plants before it is carried to the pine in the spring.

This disease is caused by the fungus Cronartium ribicola. It is only a problem in ornamental pines when currants or gooseberries (Ribes species) are growing nearby. Currants or gooseberries are alternate hosts and are needed to complete the life cycle of the disease organism. The fungus attacks the living bark of white pine, first breaking out in blisters, which exude a secretion, later forming larger, bright orange-colored dots. These orange dots are filled with fungal spores that are carried to the alternate host, where it develops during the summer. Spores from the currants re-infect healthy pines. The disease spreads rapidly up and down the tree, killing the branches and the main trunk.

Prevention & Treatment: Remove all currants or gooseberries within a one-mile radius. Prune out cankered branches and excise stem cankers by removing bark at least 4 inches above and below and 2 inches on either side of discolored bark.

Pitch canker, named for the large flow of resin from infected parts, is caused by the fungus Fusarium circinatum. The disease deforms or kills trees, suppressing the height and growth of survivors. Death is more often due to multiple branch infections than to girdling trunk lesions. Diseased bark turns dark reddish-brown, and the underlying sapwood is light yellowish-brown or darker where infiltrated with resin. Resin-soaked wood beneath cankers may extend to the pith. Resin usually exudes from the lesion and may run down the bark or drip on the needles. Needles on girdled branches turn yellow, then brown. Dead needles, glued in place by crystallized resin, often hang from killed shoots for more than a year, slowly weathering to a dull, grayish brown. 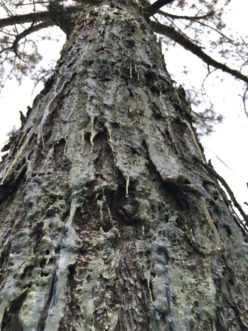 In extreme cases, copious amounts of resin may drip down the trunk from a pitch canker infection.
Photo by Stephen Goodfellow, International Forest Company (IFCO)

Prevention & Treatment: If the canker can be completely removed surgically or through pruning, this may stop the disease. If the canker is too extensive for removal, then the tree should be removed. If branches are infected 10 inches or more from the main stem, remove and destroy them. Replant with a resistant variety, such as Eastern white pine. The fungus Diplodia sapinea can be a serious problem on older pines and occasionally seedlings. This disease overwinters on infected shoots, bark, and cones and infects growing branches or shoot tips. The disease may be recognized by the dead needles at branch or shoot tips, the deep red color of the bark, and the black streaks that occur in the wood.

The new growth of branches may be stunted, the needles turn brown, and the terminal buds exude an excessive amount of resin. With a hand lens, tiny black fruiting bodies may be seen at the base of diseased needles. Cankers may be formed at the nodes. Scots, mugo, and occasionally white pines are very susceptible to tip blight.

Prevention & Treatment: Control is possible for this disease. As soon as the blight is noticed, the infected needles, twigs, and cones should be pruned and destroyed. Pruning should be done when the branches are dry because there is less danger of spreading the spores. Where infection has been particularly severe, preventative fungicides may be recommended.

This highly destructive problem is a root rot disease caused by the soil-borne water mold Phytophthora cinnamomi and occurs primarily on shortleaf and occasionally on loblolly pines. It is most easily recognized in its advanced stages when the foliage is sparse and ragged in appearance. Needles are only half their normal length, and trees die prematurely.

Prevention & Treatment: Shade tree appearance can be improved by the application of fertilizer high in nitrogen content. Use strict sanitation to avoid the introduction of the fungus and improve drainage. Plant tree species or varieties that are less susceptible to littleleaf disease. 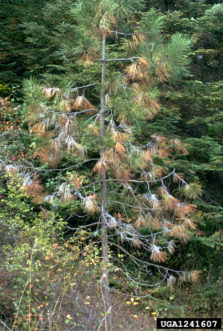 This disease is caused by one of several fungi, such as Lophodermium species, Ploioderma species, or Rhizosphaera species. It can be found on pine trees of any age. Brown spots with yellow margins develop on the needles in March and April. Tips of older needles turn brown from the tips in, and premature needle shedding occurs. Infected needles are covered with spores, which are transported by wind and rain and infect healthy needles. Rhizosphaera species produce fruiting bodies (black pin dots, capped by a bit of white wax) on stalks in rows, on all faces of the needles. Lophodermium fruiting bodies are dark brown specks, usually shaped like little footballs, and Ploioderma fruiting bodies appear as black lines on the needles.

Prevention & Treatment: Chemical control is usually not necessary. If trees are shaded, remove any shade-producing structures or plants, where practical, to allow increased light penetration and air movement. Incidence of needle cast is usually greater during years with wet springs or early summers. This disease is caused by the fungus Lecanosticta acicola and primarily affects longleaf pines (though it may also affect other southern pines). While it can be found on pine trees of any age, it typically affects longleaf in the grass or shoot stage. Yellow circles with brown spots in the center develop on the needles, causing needle tips to die and prematurely fall off. Spores are spread to growing needles from infected areas. This disease rarely kills a tree, but it may delay tree growth.