There are 60 different forms of euonymus available from American sources. They range from evergreen shrubs, such as Japanese euonymus (Euonymus japonicus), to evergreen vines, such as wintercreeper euonymus (E. fortunei), to deciduous groundcovers, such as running euonymus (E. obovatus). All euonymus species prefer full sun or light shade and fertile, moist, well-drained soil. They do not tolerate waterlogged soil. For more information on growing euonymus, refer to HGIC 1063, Euonymus.

Powdery Mildew: Powdery mildew is the most common and possibly the most difficult disease to control on euonymus. It is caused by the fungus Oidium euonymi-japonici. Symptoms consist of a flat, white to gray growth primarily on the upper surfaces of the leaves, which can be partially rubbed off. Leaves may yellow slightly and drop, but heavy leaf drop is not a characteristic symptom. On young shoots, leaves can become curled and scarred if the infection is severe.

Prevention & Treatment: Prune and destroy heavily diseased branches. Remove and destroy fallen leaves. Plant in a sunny area, do not crowd plants, and avoid overhead watering. Chemical applications should begin before new foliage is infected. Fungicides will protect foliage from infection (by killing the mildew spores as they germinate) but will not remove the dense, white fungal growth from infected leaves. Myclobutanil, propiconazole, and thiophanate-methyl have foliar systemic properties and can be sprayed less often than sulfur, copper fungicides, or horticultural oil. Mix horticultural oil at a 2% solution with water (5 tablespoons per gallon of water) to control powdery mildew. See Table 1 for examples of products. When powdery mildew persists and sprays are repeated, it is recommended to rotate fungicides to decrease the chance of fungi developing resistance. Read and follow all directions on the label. 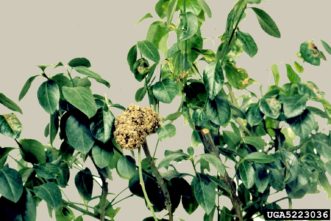 Crown Gall: Crown gall is caused by the soil-inhabiting bacterium Agrobacterium tumefaciens. Large, corky galls up to several inches in diameter appear at the base of the plant and on the stems and roots. The galls are rounded, with a rough, irregular surface. Plants with numerous galls are weakened, their growth is slowed, and leaves turn yellow. Branches may die back. The galls disrupt the flow of water and nutrients to the top of the plant.

Prevention & Treatment: The bacteria are spread by infested soil, transplants, and contaminated tools. Even though infected plants cannot be cured, they usually survive for many years. To improve the appearance of the plant, prune out and destroy affected stems below the galled area. Sterilize pruning shears after each cut with rubbing alcohol. Destroy severely infected shrubs. The bacteria will remain in the soil for two to three years. In replanting the area, select only resistant species of plants, such as barberry, boxwood, holly, mountain laurel, and elderberry. 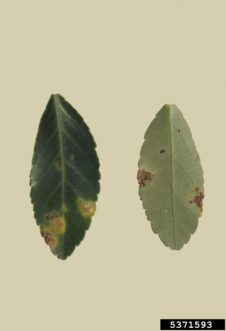 Cercospora Leaf Spot: The fungi Cercospora destructiva and C. euonymi cause irregularly shaped brown spots on the leaves. The spots vary in size from pinpoints to half an inch across. They often merge to cover whole leaves. The centers of large spots become grayish tan, and the causal fungus produces tiny, black fruiting bodies on the upper surface of the spots.

Prevention & Treatment: Leaf spot is fairly common but rarely life-threatening to the plant. Rake up and destroy all fallen leaves. Spray diseased plants with thiophanate-methyl. See Table 1 for examples of products. Read and follow all directions on the label.

Anthracnose: Anthracnose is caused by the fungus Colletotrichum gloeosporioides. Symptoms consist of small, brownish spots with light-colored centers on the leaves and twigs. Tiny cracks in the leaf spots indicate fruiting structures of the fungus. Considerable defoliation can result. The disease is a problem during cool, wet springs. Variegated varieties are more susceptible.

Prevention & Treatment: Rake up and destroy leaves and twigs from infected plants. On smaller plants, prune off and destroy all infected growth at the first sign of infection. Severe outbreaks may be prevented with periodic applications of chlorothalonil, mancozeb, or copper fungicide sprays. See Table 1 for examples of products. Read and follow all directions on the label.

Scab: This disease, caused by the fungus Elsinoë euonymi-japonici, disfigures Japanese euonymus. Spots develop on both surfaces of leaves but are most common on the upper surface. The spots are very small, grayish-white with a raised orange-cinnamon, waxy-appearing margin, and, in the larger spots, a raised, dark center. When they are numerous, the spots may merge together. The centers of the leaf spots sometimes fall out. On the stems, spots are similar to those on the leaves, but they are often darker in color and more likely to merge together.

Prevention & Treatment: Rake up and destroy all fallen leaves and spray with thiophanate-methyl. See Table 1 for examples of products. Read and follow all directions on the label. 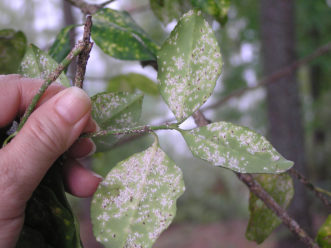 Several species of scale are pests on euonymus. Scales are unusual insects in appearance. They are small and immobile, with no visible legs. Scales vary in appearance depending on age, sex, and species. They feed on sap by piercing the leaf or stem with their mouthparts and sucking.

Euonymus Scale (Unaspis euonymi): This is the most common and most serious pest found on euonymus. The protective armor covering of an adult female euonymus scale is dark, oyster-shaped, and about 1/16-inch in length. Adult males are very small, winged insects that leave their narrow, white armored covering for mating. The eggs laid by the female are yellow and found beneath the female’s covering. When the eggs hatch, the crawlers (immature forms) move around before forming their own protective covering. Males typically outnumber females. With a heavy infestation, clusters of white males can be easily seen on leaves and stems. Initial symptoms of euonymus scale infestation are yellow spots on leaves. With a heavy infestation, branches and possibly the entire plant may die. 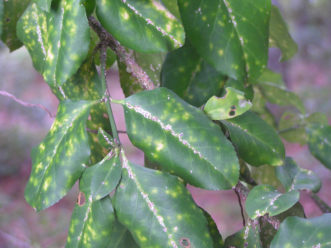 Prevention & Control: The following Euonymus species are resistant to euonymus scale: E. alatus ‘Compactus’ and E. fortunei ‘Acutus.’ Consider using these in new plantings. Euonymus scale is difficult to control. With light infestations, the scale can be scraped off by hand and destroyed. Prune out and promptly dispose of heavily infested branches. Scales tend to thrive on stressed plants. Follow a recommended fertility program, mulch, and water plants weekly during drought to promote plant health.

Horticultural oils (also called supreme, superior, or summer oils) work very well to control armored scales, such as the euonymus scale, on ornamentals by penetrating their waxy covers and smothering them. Horticultural oil sprays will kill the eggs, crawlers (immatures), and adult scales. Horticultural oils applied at higher rates of 3% to 4% (7½ to 10 tablespoons oil per gallon water) during the dormant season (winter to early spring) will penetrate the thick waxy covers and kill the overwintering adults and eggs. Applications at lower rates of 2% (5 tablespoons oil per gallon water) can be used during the late spring (April) to target the crawlers and the newly settled scales with thin waxy covers. It is best to spray when temperatures are between 45 and 85 degrees and in the early evening due to plant sensitivity and to slow the drying time of the oil spray. More than one application may be necessary. See Table 1 for examples of products.

Adult scales are relatively protected from contact insecticides by their waxy covering, but their immature forms, called crawlers, are susceptible. However, contact insecticides will often kill the naturally occurring enemies of scale. Monitor the crawler emergence with sticky cards, double-faced tape wrapped around a branch, or by putting an infested shoot or leaf into a baggie and watching for crawler movement. Crawler activity often coincides with the flush of new plant growth in the spring. However, some scale species may have overlapping generations with an extended crawler emergence period, such as along the coast. These crawlers are often yellowish-orange and appear as moving specks of dust.

If contact insecticides are necessary, the following are effective against crawlers: acephate, bifenthrin, cyhalothrin, malathion, and cyfluthrin. See Table 1 for examples of products. Make sure that crawlers are present before using these pesticides. Apply three sprays at 10-day intervals. As with all pesticides, read and follow all label instructions and precautions.

A soil application around the base of the infested plant with a product containing dinotefuran used once in the spring will help control armored scales. See Table 1 for examples of products. These may be found at landscaper supply stores. Read and follow all label instructions and precautions. Soil applications may be used in addition to sprays with horticultural oil. Note: Soil applied products containing imidacloprid do not effectively control armored scales, such as euonymus scale.

Table 1. Fungicide and Insecticide Products for Home Landscape Use on Euonymus