With their wonderfully fragrant blossoms and lustrous, dark green leaves, gardenias (Gardenia jasminoides) are popular shrubs with many southern gardeners. Their positive qualities compensate to a large extent for the fact that gardenias are somewhat high-maintenance plants with fairly specific cultural requirements. To learn more about growing healthy gardenias, see HGIC 1065, Gardenia. In addition to problems resulting from improper growing conditions, gardenias are also susceptible to several diseases, insect pests, and other problems. For information on insects and spider mites 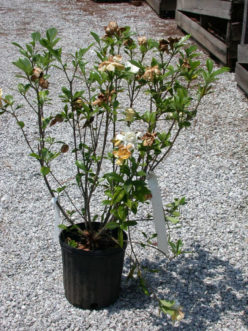 Root Rots: Various fungi, including Phytophthora species, Rhizoctonia species, and Pythium species, cause root rots in gardenias. In South Carolina, Phytophthora is identified most often as the pathogen. As the disease name indicates, root rots are characterized by a decay of some portion of the roots.

Above-ground symptoms of root rot include leaf yellowing (oldest leaves first), leaf drop, and wilting. Depending on how extensively the roots are affected, as well as which roots are affected, the plant may appear generally unhealthy for an extended period, or it may wilt suddenly and die. In addition, the symptoms may be present on only one side of the plant or may affect the plant as a whole.

When above-ground symptoms indicate root rot, roots should be examined as soon as possible. A healthy root system will have white feeder (non-woody) roots present. With root rots, the feeder roots may be brown and rotting or missing completely. The outer tissue (cortex) of rotting roots can be easily removed by pulling, leaving behind the threadlike core or stele (conducting tissue).

Disease development is favored by any factor that encourages wet soil conditions, including poor drainage and over-irrigation. Planting too deeply also contributes to the problem.

Control: The best management practice for root rot problems is prevention. Check the roots of nursery stock before purchasing. Make sure there is adequate drainage in the area where you want to plant. If the area drains poorly, creating a raised bed can help.

If a plant has already died from Phytophthora root rot and a replacement is needed for the same location in the landscape, it is best to choose a plant that is known to have resistance.

Powdery Mildew: The fungus, Erysiphe polygoni, causes powdery mildew on gardenias. Fungi that cause powdery mildew typically grow on the surface of a plant, sending only their haustoria (specialized organs for absorbing nutrients and water) into the plant cells.

Signs of infection include a whitish to grayish colored, powdery, fungal growth that can occur in spots or patches, which sometimes enlarge to cover the entire leaf or other plant structure. The fungus is mostly found on the upper leaf surface, but also may be found on the lower leaf surface. The disease typically appears in the summer and reaches its peak in late summer. Over time, these patches of fungal growth may darken and form small, rounded, reproductive structures called chasmothecia. They begin as pinhead-sized, round structures that are whitish and then darken to yellow-brown and finally to brown or black.

Control: Properly space plants to allow for good air circulation, which reduces the humidity level needed by the fungus to infect. Prune out diseased tissue, rake up and destroy fallen leaves, and apply a fresh layer of mulch beneath the plants. Stem Canker: In general, cankers are dark, oval, or elongated stem lesions that may be sunken with a raised edge. With time, the canker may develop into a gall (a swollen area resulting from infection). Cankers are most often found on stems (especially near soil level) of a gardenia; however, leaves and roots are also susceptible. The fungal pathogen that causes gardenia stem canker, Phomopsis gardeniae, gains access into the plant through wounds. The fungus remains localized near the canker and, with high humidity, will produce spores that are easily spread by rain or overhead irrigation. The fungus survives the winter within the canker.

Control: The most important aspect of controlling this disease is to prevent injury to the gardenia. Infected stems should be pruned out, taking care to disinfect pruners in a 10% bleach solution (1 part bleach to 9 parts water) or 70% alcohol solution between cuts. Avoid stressing an affected gardenia further by over-or under-fertilizing or over-or under-watering. Irrigate at the base of the plant to minimize moisture on plant surfaces as well as the spread of spores. Remove and dispose of affected plants that are growing poorly. Any new gardenias should be planted in a different location. In a home landscape, fungicides are generally not practical or effective control options. 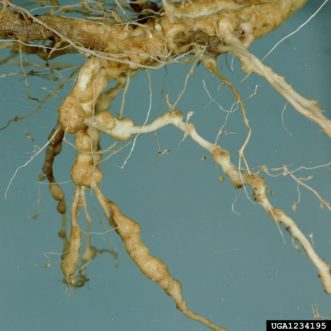 Nematodes: Various nematodes (microscopic roundworms) feed on the roots of gardenias. Above-ground symptoms of root damage resulting from nematode feeding include wilting during hot, dry weather, often with recovery at night. Leaves may show yellow mottling and other indications of a nutritional deficiency. Over time the plant may become stunted and exhibit dieback of branches.

Below-ground symptoms depend on which nematode species are feeding as well as how many are feeding. Root damage can include stunting, discoloration, excessive branching, and or the presence of galls (small swellings of plant tissue).

Control: Root and soil samples should be tested to confirm the presence of nematode damage. Depending on the amount of root damage, gardenias may benefit from more frequent applications of water and fertilizer. In addition, mulching is helpful. Remove and dispose of severely affected gardenias.

There are no effective nematicides available to homeowners for treating the soil to control nematodes. If nematodes are a problem in a particular area, plant in a different location or choose a plant that is resistant to the nematodes present. 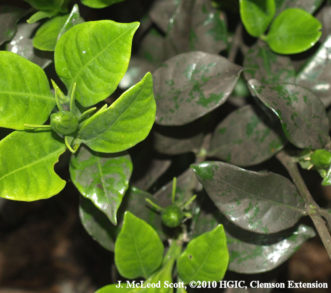 Sooty Mold: A charcoal-black, powdery or velvety coating on leaves and other plant parts is the result of the growth of one of the commonly occurring sooty mold fungi. The good news is that despite its appearance, the fungus is not infecting plant tissue and is not causing disease. It grows on the surface of the plant and gets its nourishment from honeydew that is excreted by sap-sucking insects such as aphids, some scales, whiteflies, leafhoppers, mealybugs, and others. As these insects suck plant sap, they are unable to digest all of the sugar that they ingest. The excess is excreted as a sugary liquid called honeydew. For information on controlling the insect pests whose feeding habits result in sooty mold problems, see HGIC 2059, Gardenia Insects & Related Pests.

Diagnosis of sooty mold is made simple by the fact that the black fungal growth can be removed by wiping with a moist paper towel, or in some cases, by peeling it off to reveal an undamaged plant surface.

While mainly a cosmetic problem, when sooty mold is severe, it can reduce the vigor of plants by blocking sunlight necessary for photosynthesis (food production). On the other hand, insect feeding can seriously damage a plant. Between insect feeding and reduced photosynthesis, the plant may be more susceptible to other insects, diseases, and environmental problems.

Control: Since the cause of the problem is insect activity, control measures should be directed at the insects rather than the fungus. Important first steps include identifying the plant that is infested and the insect that is causing the problem. When identifying the infested plant, always look at plants growing above the gardenia as well as the gardenia itself. With a sufficiently heavy infestation of sap-sucking insects, the sticky honeydew may drip from an infested over-hanging tree or taller nearby plant to non-infested plants growing below (as well as onto objects such as lawn furniture, decks, cars, etc.).

Yellowing Leaves: As an evergreen shrub, it is normal for the older leaves of a gardenia to turn yellow and drop. This typically occurs during early spring before new growth appears. If chlorosis (leaf yellowing) occurs at other times of the year and there is no evidence of insect pests or disease, and the remaining leaves look healthy, then there may be an environmental or cultural factor causing yellow foliage. As with bud drop, several stressors, including insect infestations, nematode feeding, over-watering, under-watering, poor soil drainage, insufficient light, soil temperatures below 70 °F, and poor nutrition, may cause leaf yellowing and drop. Iron Chlorosis: Gardenias are acid-loving plants that grow best in soil with a pH of 5.0 to 6.0. Iron is an essential nutrient that plants use to produce the green pigment chlorophyll. While iron is rarely deficient in the soil, if the soil pH is above 7.0, the iron may be in a form that is not available to the plant.

When a gardenia does not get the iron it needs, its leaves generally turn pale green to yellow. Young leaves may turn completely yellow except for the veins and nearby tissue, which remains green. This symptom is known as interveinal chlorosis. Older leaves may only be yellow along the edges. Overall, the plant may become stunted.

Control: Ideally, soil pH problems need to be corrected prior to planting. Since this option is often not available, the first step for solving a suspected iron deficiency problem is to take a soil test to determine the soil pH. Make sure that turfgrass lime applications, which raise the soil pH, do not reach the soil beneath gardenias. If the existing pH is identified as being too high, instructions are provided in HGIC 1650, Changing the pH of Your Soil on how to lower soil pH as needed.

In cases where the soil pH was raised above 7.0 due to the application of lime, water-soluble sulfur or aluminum sulfate can be applied to the soil beneath the shrub. However, in soils with a naturally high pH, applications of these materials will not result in a permanent lowering of the soil pH.

In lieu of changing the soil pH, annual applications of chelated iron can be applied to the soil or directly to gardenia leaves to provide the necessary iron. Another iron source that can be used for foliar applications is ferrous sulfate (FeSO4·2H2O). When foliar applications are used, the addition of a couple of drops of dishwashing soap per gallon of water will help wet leaves and aid absorption. These soil or foliar applications may need to be applied more than once during the growing season if the underlying soil pH problem is not resolved. Reapplication time should be determined by observing the leaves for the reappearance of symptoms. See Table 2 for brands of iron-containing products.

Once the soil pH has been corrected, it can be maintained by using a slow-release fertilizer that is designed for acid-loving plants, such as Vigoro Premium Azalea, Camellia & Rhododendron Food (10-8-8); Scotts Evergreen Flower, Tree & Shrub Continuous Release Plant Food (11-7-7); Lilly Miller Azalea, Camellia & Rhododendron Food (10-5-4); Hi-Yield Azalea, Camellia, Gardenia & Evergreen Fertilizer (4-8-8); or Espoma Holly-tone (4-3-4). Also, when applying lime to nearby lawns or landscape plants, keep it away from gardenias. Keep in mind that lime can leach from cement and brick mortar and affect the pH of the surrounding soil.

Pesticides are updated annually. Last updates were done on 3/21 by Joey Williamson.